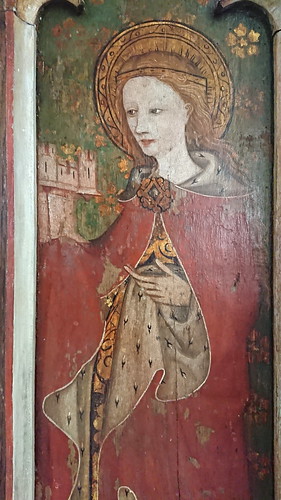 Here we are in the meadows and copses to the north of Wroxham on the quieter side of the Broads, and although Barton Turf sits beside Barton Broad its church is a way off alone in the fields, and you would not know that the water was anywhere near. The tall tower is a landmark for miles around, but closer to the trees in the sprawling churchyard huddle around it and reveal tantalising glimpses of the wide aisles and chancel as you cycle or walk up the zigzagging lanes. On a winter day with the rooks cruising around them the trees can make Barton Turf church seem rather a forbidding place, but in high summer they are as glorious as the building they guard.

The long path leads up to a fortress-like north porch, which in the past was not inappropriate because when I first came here at the start of the century the church was kept locked without a keyholder notice. On that occasion I had to make phone calls and jump through hoops to be given permission to borrow the key from one of the biggest houses of which I’ve ever knocked on the door. But for many years now St Michael has been open every day, and I do not recall what it was like before with intent to admonish the parish for their former behaviour, but simply to point out that circumstances change and you should never give up hope, for now this is one of the most welcoming churches in the area.

A wander around the churchyard reveals the sombre memorial against the south porch which remembers four young brothers who drowned in Barton Broad on Boxing Day 1781. To the west of the church a deeply cut memorial of the 1880s tells us that eleven year old Joseph Coleman was suddenly called from time into eternity at Norwich Hospital. Then you step through that grand north porch with its triple image niches into a wide open space full of light, for there is very little coloured glass here. Brick pamment floors sprawl beneath your feet, the nave and aisles filled with low 19th Century benches which are unfortunate but not intrusive. As if to complement the width of the church the font is a wide version of one of those traceried fonts common in these parts in the second half of the 14th Century, now sitting on a low modern pedestal, and perhaps you begin to get a sense of the harmony of the interior, as if calculated to reveal the full drama of the view to the east, for beyond the benches at the east end of the nave stands Barton Turf’s great glory, the late 15th Century screen.

The structure sits beneath the chancel arch, its drama heightened by the way both aisles continue up to flank the chancel beyond. It is perhaps not as magnificent as the famous screen not far off at Ranworth, but the painting of the figures on the dado panels is generally considered amongst the finest in England. There are twelve figures, six on each side, and they depict three saints and nine of the Orders of Angels. It is these angels which almost stop the heart in wonder, for they are remarkable.

The north range features I: St Apollonia with her pincers and tooth, II: St Sitha with her household keys, and then four of the orders of angels: III: Powers, IV: Virtues, V: Dominations and VI: Seraphim. Partnering this last, the south range begins with VII: Cherubim, and then continues VIII: Principalities, IX: Thrones, X: Archangels and XI: Angels, before finishing with XII: St Barbara holding her tower. The orders of angels can also be found over the border in Suffolk at Southwold, Hitcham and Blundeston, but nothing like as good in quality. The exquisite beauty of the angels’ faces is accentuated by the fact that two of them, Dominations (V) and Seraphim (VI), have their faces unrestored, and remain as they were when fundamentalist members of the congregation here scratched them out in response to the Injunctions against Images of the 1540s. Memorable too are the monstrous creature at the feet of Powers (III), the urine flask held by Principalities (VIII) and the naked sinners cosying up to Angels (XI).

The entrance to the south chancel aisle also has a screen, and it is curious. It features four kings, all easily recognisable. From the left they are Henry VI (considered a Saint by many in the late Middle Ages, but the Reformation intervened before his canonisation) St Edmund, St Edward the Confessor, and St Olaf of Norway. The quality is primitive compared with that of the roodscreen, and you might think it earlier if it were not for the inclusion of Henry VI, which gives us a terminus ante quem of 1471, suggesting that it is roughly contemporary with the roodscreen, and indeed we might think it later still, perhaps an early 16th Century attempt by locals to add to the glory of the adjacent screen. Of course, it is not impossible that it was placed elsewhere originally.

Collected fragments of 15th Century glass now reset as a panel in the south aisle include that popular late medieval image of angels peeling back the roof of the stable to see the Christ child, a fragment of a now-lost nativity scene. Perhaps it was broken up by the same enthusiastic 16th Century parishioners who defaced the screen. The fragments also include the triple-crowned head of St Gregory.

A not-wholly attractive cherub leans with an upturned torch, weeping beside a broken pillar on the 1787 memorial to Sarah Norris who lies, we are told, in the same vault which contains the bodies of her husband and son. It goes on to say that when she was deprived of an only son eminent for his virtues and abilities, her orphan nieces became the objects of her care and bounty. A broken pillar often represents a life cut short, but Sarah lived her full three score years and ten so perhaps in this case it was intended merely as a compliment.

A curiously undated, but obviously late 19th Century plaque at the west end records the gift by John Francis of the interest of £1100 in three percent consols to be expended in the purchase of clothing, bread and coals to be distributed during the winter of each year amongst the deserving poor of this parish who attend this church. Three per cent consols were a form of government borrowing that had been offered in 1855 providing a form of annuity for investors. Surprisingly, they were finally paid off as recently as 2015 by the coalition government.

John Francis’s inscription goes on to tell us that he also in his lifetime inserted a beautiful stained glass window over the west door of this church in memory of the members of his family. This glass, by Ward & Hughes, is there today, and although we might wish it away so that clear light might play across the woodwork on a bright summer evening or a winter afternoon, it is by no means the worst work of that sometimes unfortunate workshop, and tucked away beneath the tower does not intrude too much.

On the day of the National Census of Religious Worship of 1851, the registrar John Dix gave a figure of 70 people who had made the journey across the fields to attend morning worship at Barton Turf, 30 of whom were scholars and thus for them attendance would have been compulsory. Dix added the note that I certify the foregoing return to be the best estimation I can make, so we might judge that it would not have been higher than this. Out of a parish population of 429 this is barely one in six, even if we include the scholars, which is rather low for east Norfolk. Meanwhile, 36 people stayed in the village to attend morning service at the Methodist chapel. It is likely that rather more than either of these two congregations were attending non-conformist services elsewhere, and were probably among the several hundred congregants at William Spurgeon’s Baptist church a few miles off at Neatishead, for these were heady times for non-conformist worship, and the 19th Century Anglican revival in East Anglia was only just beginning.