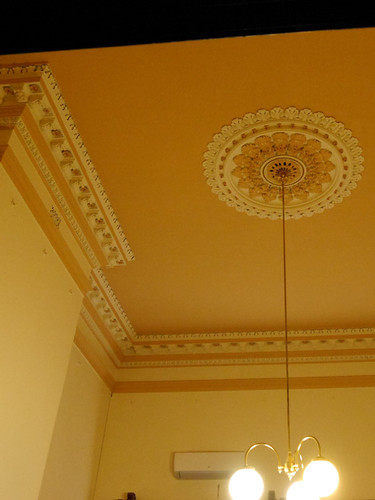 “There is now on view in the window of Messrs. E. S. Wigg & Sons’ premises, in Rundle-street, a beautifully executed perspective in pen and ink, drawn by Mr. J. S. Beaver, of a residence designed and being built at Somerton, near Brighton, for Mr. J. F. Cudmore.” [Register 9 Feb 1882]

“The house of 30 rooms was renowned for its woodwork and beautiful fittings. The stained-glass windows at the entrance hall depicted the Cudmore coat of arms. Entertaining was run on a lavish scale, and visitors to the house will remember the beautiful stained windows in the ballroom which represented the seasons of the year. Many of the rooms had walls of embossed oak leaves, and the Marshall Wood statuary, the wonderful pictures and china, and rare old silver kept connoisseurs in a state of rapture. The entrance hall was remarkable for its Italian tiles, and beautiful parquetry floored most of the rooms.” [The Mail 15 Dec 1928]

“the Chief Secretary received a letter from Mr. J. F. Cudmore, of Glenelg, of which the following is a copy:— ‘In view of the prospect of war with Russia, I beg to offer the Government without cost the use of my house, Paringa HalL New Glenelg, as a military hospital should such be required, and I am also prepared without expense to the Government to provide such furniture and bedding as may be found necessary. I would call the attention of the Government to the fact that the position of my house, the number of rooms, and the appointments (which include hot and cold water baths), would render it in every way suitable for the purposes above mentioned, as would also the fact of its having a tower and flagstaff, from which observations could be made and signals given.’” [Register 29 Apr 1885]

“The death occurred on Saturday of Mr. J. F. Cudmore, of Paringa Hall, Brighton road, Somerton, at the age of 74 years. The deceased was one of the leading pastoralists of South Australia, and his activities extended to the other States. His father (the late Mr. D. Cudmore) originally came out from England to Tasmania to join a cousin, who was attached to a regiment of British troops there, but subsequently decided to settle on the mainland of Australia. He chartered a vessel to cross over to South Australia, and on the voyage the late Mr. J. F. Cudmore was born. The father started a brewery at Kapunda, but not long afterwards took up sheepfarming at Yongala Station. The son was educated at Sevenhills College, in the Clare district. About 1859 he crossed the River Murray, and became the occupier of Paringa Station, opposite to Renmark. In 1863 he proceeded to Brisbane, bought sheep there, travelled them along the coast to Rockhampton, and then out into Central Queensland in search of another pastoral holding. The flock was shorn en route. . . a few years later he ventured into Queensland again, started Gooyea Station, and next the Milo and Welford Downs, in South-Western Queensland. As time went on he became interested in land in Central Queensland, and took up Tara Station, with several of his sons. He established his home at Paringa Hall about 30 years ago. When the Western Australian gold rush occurred he was early on the Coolgardie field with a camel party, and erected what was believed to be the first crusher there. . . He has left six sons and four [five] daughters. The sons are Mr. K. Cudmore (Brisbane manager for Goldsbrough, Mort, & Co.), Dr. A. M. Cudmore (of Adelaide), Messrs. J. K. and D. C. Cudmore (of Tara), T. C. Cudmore (of near Blackall), and R. M. Cudmore (of Adelaide).” [Register 19 Aug 1912]

“Mrs. Cudmore, widow of Mr. J. F. Cudmore, died at her residence, Paringa Hall, New Glenelg, on Sunday. Her husband, who for some years was one of the leading pastoralists in South Australia, besides being interested in squatting pursuits in the other States, died on August 17 last. Six sons and five daughters are left.” [Advertiser 3 Dec 1912]

“For Sale. . . Paringa Hall. The well-known residence of the late J. F. Cudmore, situated in 10 Acres of Grounds, with complete Stables, Outhouses, &c, and 7 Acres of adjoining Land, with Cottage.” [Register 20 Nov 1913]

“The purchase of Paringa Hall by the Marist Brothers of Sacred Heart College, Semaphore, demonstrates the great interest taken in educational extension by the educational authorities of the Roman Catholic faith; and in their latest possession, which cost originally £30,000 to build. Paringa College will be one of the most ornate educational institutions in the Commonwealth. When originally constructed by Mr. J. F. Cudmore, the question of expense was not allowed to enter into the minds of builder or architects, and one large set of stained glass windows alone cost 300 guineas. The upstair portion, surrounded by spacious balconies, will form the living quarters for the students and guardians, whilst the ground floor will be utilised for chapel, class, and living room.” [Advertiser 6 Jun 1914]

“Messrs. Theodore Bruce & Co.. auctioneers, wish to draw special attention to the fact that the furniture at Paringa Hall, as advertised in the auction columns, is of the highest quality throughout, having been manufactured to order by Walker and Sons, the well-known English manufacturers. The marble statuary and bronzes are also worthy of special mention, being works of art of the best quality. Included in the statuary are exceptionally fine examples by Marshall Wood, the world-famed sculptor.” [The Mail 13 Jun 1914]