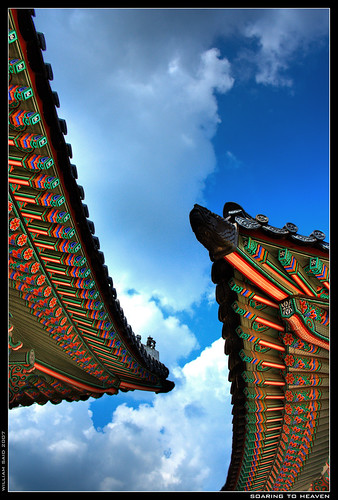 This is at the Gyeonbokgung Palace in Seoul, South Korea. One of the spectacular sites at on the Palace grounds are the myriad buildings for the Emperor and his staff. Although Korean architecture borrowed heavily from China and Japan, only in Korea do you find this vivid and brightly colored treatment! A feast for the eyes! And the sky was fantastic that day (a rare treat since Seoul is usually so hazy or overcast!)

And I did not edit this image from two others, the roof eaves really are that close!

NB: This was the Emperor’s main palace during the Jeoson Dynasty from about 1394-1910. However, it was burned down in the 1592 Japanese Invasion, and not rebuilt until 1868. An extremely significant locale, Hangul, the Korean alphabet was even invented here. One of the most significant events that occurred here was the assassination of the the Empress Myeongseong in 1895 by the Japanese (or Korean militia on hire from Japanese, depending on who you read). A fantastic Korean movie you should check out is called "Han-ban-do" (transliteration). Literally means "Korean Penninsula". A lot of it is filmed at this Palace.