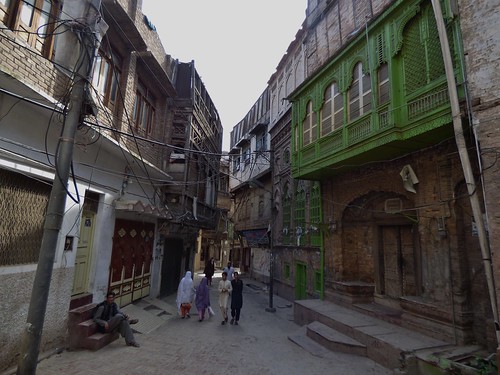 Sethi Mohallah is an area in the heart of the walled city of Peshawar. The Mohallah contains seven houses (including Sethi House a cultural heritage) built by the Sethis. These unique houses are a blend of the art and architecture of Gandhara and Central Asia, are rare architectural masterpieces located in the walled city.The first was built by Haji Ahmed Gul in 1882.

The Sethis were traders who had businesses in China, India, Afghanistan, Iran and Central Asia, with trade centres at Mazar Sharif, Tashkent, Bukhara, Samarqand and other cities in the Asian region. The Sethi family was involved in considerable welfare work in Peshawar and had contributed to the construction of wells for the poor, along with the Lady Reading Hospital and the Islamia College Mosque.[2]

The downfall of the Sethis began during the Russian Revolution in 1917, when their businesses experienced setbacks from which they never recovered, forcing them to leave Central Asia and return to Peshawar.

Situated close to the Ghanta Ghar (clock tower), Bazaar Kalan and Gor Khuttree in Peshawar’s old walled city. The Sethis were originally Arora Khatris, before converting to Islam. Later, they simply took the name of their profession i.e. ‘Seths’ (businessmen) and hencem ‘Sethis’.

The homes were designed with inspiration from the vernacular architecture of Bukhara. Two neatly decorated tehkhanas (basement rooms), a balakhana (upper storey), dalaans (big halls), chinikhanas (rooms where decoration and art pieces are displayed on chimneypieces) and fountains can be found in each house. The ceilings are painted and the walls are decorated with mirror work. One of the houses has been purchased by the NWFP government, this house has two portions, one for men and one for women. The overall structure is a combination of brick and woodwork embellished with carved wooden doors and balconies. Painted and mirrored atriums provide fresh air and attractive views, while the main entrances are made of superbly carved wood.

It has 12 rooms and four basements and includes a fountain. Colourful glass ceilings with geometrical designs, woodwork with engravings of various splendid designs on walls, a big resting place, made of wood and called Takht-e-Sulaimani, to take sunshine in winter, beautiful ventilators, slanting window-shades, wooden wall cupboards, chimneys and red bricks stairs with projected wooden frames are some of the prominent features of the house.