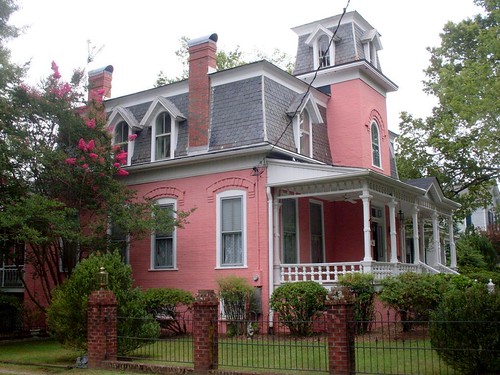 [This set on the Second Empire house in Oxford contains 5 photos] This is a creative commons image, which you may freely use by linking to this page. Please respect the photographer and his work.

In the South, the Second Empire style never caught on as it did in many other regions of the country. This example in Oxford, North Carolina dates from 1889, as a plaque on the porch indicates; this was towards the end of the Second Empire as a dominant architectural style. This is the Hundley-White House at 208 College Street.

The home stands out for two reasons: it is Second Empire in a small Southern town; and it is pink. The brick house is essentially rectangular with two stories, the second being the slightly concave mansard roof. There appears to be a basement as well. The shingling is an alternation of pentagonal and brick-patterned material (I don’t know if slate is used on this house). No iron crestings are present. The tower, also with concave slope, is centrally placed in the façade, rising from the entrance to its height. Dormers jut from the mansard roof and from the tower; the windows are of a full arch with steeply pitched hoods. The windows on the first level are much taller than those on the roof area. The cornice is not bracketed but consists of a vertical pattern of gray. The four chimneys, all with metal caps, are placed at either side of the dwelling. The porch is supported by 9 posts with a railing of nearly rectangular woodwork in between. A frieze hangs from the roof of the porch. Steps leading to the wood double doors also have railings. A metal fence with brick piles surrounds the house, and between the front two piles is an iron gate with a small wheel or roller for easy opening. On a few of the piles are brass lamps, wired for electricity.

This work is licensed under a Creative Commons Attribution-NonCommercial-ShareAlike 3.0 Unported License