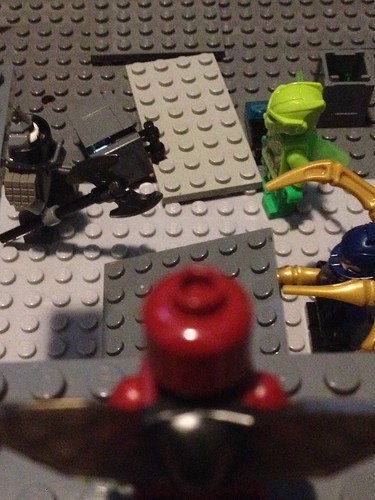 Guess it was a good thing I was in the neighbourhood, otherwise my brother and his friend Harry would be street pizza right about now. The days go by, as he recovers from his encounter with Doc Ock. Since he has more broken bones than he would like to admit, I’ve pulled superhero duty as Beetle. No word on if Otto junior survived the explosion, along with Spencer Smythe. Peter would end up having to tell Aunt May about his double life, as there wasn’t really any excuse he could’ve given for a building falling on top of him. We had to create a cover story, for those that don’t know about his alter ego. A rock climbing accident. Though that was the wrong call apparently, as Peter never really goes rock climbing, unless he’s forced into it with friends. Though his friend Harry is pretty skeptical, so I wouldn’t be surprised if he put two and two together.

Speaking of Harry, he didn’t make it out of the encounter unscathed. He would learn that he’s paralyzed from the waist down. All the feeling in his legs, gone, because of falling debris. He blames Spider-Man for this, as being paralyzed is a fate far worse than death. Peter feels guilty, even though it wasn’t his fault, it was Otto’s.

Anyways, I’m on my way to a SHIELD warehouse, where an alarm was tripped. Oh yeah, guess I forgot to mention I’m part of SHIELD. According to this inventory log, this warehouse has various amounts of gadgetry. Amongst all these devices, is the super soldier serum. Wait what? I thought it was all destroyed?! Just one more of Fury’s secrets.

Upon arrival, I notice the door is gone. I enter the warehouse through the window, and I land on the catwalk. Below, are three people, trashing the warehouse.

"Our boss wanted this right?" I hear the biggest one ask, as he smashes through the wall, and grabs a case.

"Yeah, that’s it alright. Let me have it before you accidentally destroy it, you big oaf." Another says, this one dressed in high-tech armor, with 4 golden metallic arms. Almost like Doc Ock’s. Though, Peter says his arms were fairly lengthy, so maybe it’s just a coincidence. His arm reaches, and grabs the case.

"Let’s get out of here, before someone else shows up." It’s almost like they want me to arrive. I fly towards them, directing my energy blast at the bigger guy.

"Well, it’s a bit late for that. I’ll give you an A for effort though." I say mockingly, as I shoot the arm carrying the case, and the case drops down. I weave down, and in, grabbing the case before it touches the ground.

"Who are you? You’re not Spider-Man!"

"Nice deduction big guy! Not like the outfit is a dead giveaway or anything." He’s starting to get angrier, as he swings his battle-axe at me. I lose concentration for one second because of this, which is just enough time for the third person to swoop in and grab the case.

"It’s RHINO!!" the big guy yells, as he throws his axe at me, which ends up

"Scorpia told me about you. You’re Beetle. The one who turned on the Femme Fatales. Didn’t think I’d ever meet your traitorous kind here. Iron Spider, help Rhino out in keeping her occupied. I’ll deliver the package to the boss, since after all, it would be faster."

"Wow, she still talks about me? Not sure whether to be flattered, or just weirded out. You’re not leaving that easily, Sky Bandit!" Seriously? That’s what I come up with? Definitely need more practice in the naming department. I fly towards her, but Iron Spider smirks, as one of his arms stabs the bottom of my boots, where the thrusters are. With one thruster gone, it’s a lot harder to fly smoothly. Crap. Have to deal with these two first, and hopefully catch up to her. I dive, in range of Rhino and Iron Spider. I lead them throughout the warehouse, dodging Spider’s arms, and Rhino’s axe. Rhino charges at me, but I jump out-of-the-way at the last possible second, so he ends up charging into the wall behind me. I notice Rhino sweating as he turns around. So I just have to physically exhaust him, probably because of how his body is all armor, besides his face being exposed. He’s only able to perspire through his face. Since he’s not the brightest bulb in the bunch, I use this process repeatedly, getting him to charge into various walls and tables throughout the room. I intensify the heat of my blasts, and shoot them off at him. Iron Spider gets a few lucky strikes in, ripping off parts of my armor. Soon enough, he collapses, and there’s Iron Spider left.

Iron Spider: "Ugh you idiot. Must I really do everything myself?"

"First Sky Bandit ditches you, and then Rhino overheats. It really isn’t your day today. You know, you could always give up."

Iron Spider: "Me, Tiberius Stone, give up?! Hah, don’t make me laugh. Your simple mind won’t be able to best me."

"And you just revealed your name. Way to go! Also talking in the third person? Yikes, you’ve got a long way to go. Guess I should’ve seen this coming, considering your name is Tiberius." I grab Rhino’s axe from the ground. Oof, that’s a lot heavier than I was expecting. I use energy blasts to distract him, while I swing the axe at his metallic arms. I catch him off guard, and oops, there goes his metal arms. I drop the axe and start throwing punches at him. He’s somehow able to block one, before he stumbles backwards, tripping over a storage crate.

Iron Spider: "Looks like you win. Or do you? Bandit got away, which is bad news for you. Especially since he’ll be coming for this city soon enough. You can’t stop the Goblin."

"Just shut up already." I say, before knocking him out with this last punch.

I fly out of the warehouse, and Sky Bandit is long gone. It was one or the other. It wouldn’t have even been guaranteed if I went for her, as the other two would take me down the second I lose focus on them. Well, guess I better call SHIELD about this fiasco, and after that, Peter. He’d want to know about this. These freaks of nature just keep popping out of the woodwork. Hopefully a miracle happens, and Peter recovers soon, cause I have a feeling we’ll be needing Spider-Man for this.