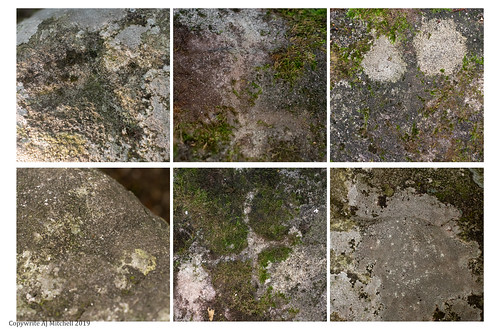 A faint and heavily worn series of petroglyphs on the monolith known as the Pierre du Sacrifce de la Peyregade all suggest that this monolith was ‘active’ at some point within the late neolithic to bronze age. The photographs suffer a little from poor light and, with a mountain thunderstorm rolling into place behind the tripod, I regret not having had a little more time to focus stack past the low light issues. The two images to point out are the top centre which has a long vertical canal with cross bars towards either end (not a poorly made Cross of Lorraine). The second of interest is the lower right where the cross is towards an end of a long curving canal with hints of two more crosses. Whilst it is not unknown for monoliths to attract crosses in the medieval period (pierre du signal) these stiff crosses are visibly from a later chronology due to the marks of metal tools (iron). Whilst the Chalcolithic is an age of metal (copper), its metal tools were soft and would not have been employed for stone petroglyphs. Early bronze age petroglyphs also continued the stone tool traditions with new bronze tools less frequent in deep rural areas and perhaps too valuable to be blunted directly onto stone and more adapted for woodwork and animal transformations. All of the remaining crosses on the above image are typical of the petroglyphs that appear around the foothills on both sides of the Pyrenees. Whilst an old late prehistorical pathway is said to have passed north south near this monolith, I do not currently have firm details