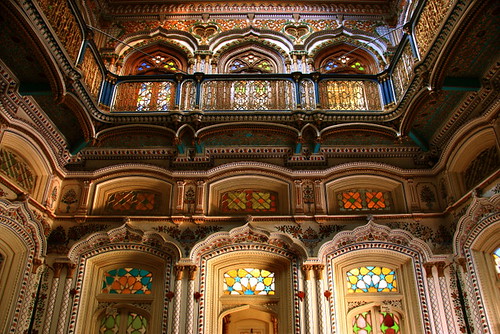 Omar Hayat Mahal (Urdu: عمر حیات محل) is a 19th century wooden architectural wonder of Chiniot, a tehsil of Jhang District in Pakistan. It is also known as Gulzar Manzil.
Omar Hayat Palace is a five story building which stands in the heart of the city. Two upper stories were removed in 1993 due to heavy rainfall and storms which may have affected the adjoining buildings. It is a great tourist attraction for both local and foreign visitors.
Members of the Shaikh family migrated from Calcutta to Chiniot around the 18th or 19th century. Sheikh Omar Hayat who was a successful trader born in a middle class family. He decided to construct a magnificent palace for his newborn son in 1923.
Syed Hassan Shah was assigned the task of palace’s construction. He gathered many famous artisans from different places who continued working day and night for 10 ten years. Rahim Bakhsh Pirjha and Elahi Bakhsh Pirjha who were masters in manabat kari did wood carving. Gazeteer Vol XXXII, Jhang district 1929 states, "The house built by Sheikh Omar Hayat is a sort of local wonder, as it cost more than Rs 200,000 to make and rises high above all other buildings of area". The construction of the palace completed in 1935 and Mr. Hayat expired in same year just a couple of months before its completion.
History claims that Mr. Hayat’s only son Gulzar Muhammad’s marriage in 1938 brought an ironic twist of fate in the shape of death. He (Gulzar) was found dead in the palace the very next day of his marriage. The news of son’s death lofted loads of grief on mother who died remembering him. Both the mother and the son were buried in the courtyard of the ground floor of the palace.
Mr. Hayat’s relatives left the palace thinking it as a subject to bad luck for sheikh family, while servants continued living for a couple of years and then parted from it. An orphanage was established by some religious leaders and then it was evacuated when its top story collapsed. Next came the Qabza groups who got shops and houses constructed on the piece of land lying next to it.
The palace’s building is perhaps the last of Mughal’s architectural style, or a Mughal Revival building ("revival" buildings are interpretations of an old architectural style by people of a later era). Unique carving cuts on the doors, windows and jhirokas reflect a colour of their own. The roofs, balconies, stairways, terrace and the stucco designs make a perfect interior. The facade of the building is decorated with a fine inlay of bricks, the dazzling shine of marble and picturesque shades help it rank among the great palaces of Mughal era landlords.
Later on this placed was occupied by Qabza mafia who destroyed most of the building However seeing death of its glory in 1989, Athar Tahir, the then deputy commissioner of Jhang, took the palace into his custody. He removed the encroachments and started its renovation with an expenditure of Rs. 1,700,000.
It was handed over to local municipal committee and a library, cultural centre and a museum were new additions which regained some vigour. A rare collection of thousands of books and subscription for seven dailies was introduced to learners and it was publicly opened the then Punjab Governor, Mian Azhar.
In Year 1997 the municipal committee refused to bear the expenses of the latest achievements and terminated the subscription of newspapers and other reading material.
It was later handed over to auqaf department in year 1998 which also failed to improve its condition. The situation is getting worse by day. The library has been closed while the reading room is standing without its assets. It was only in 1989 when the building was last looked worth renovation.
At present the palace is very much out of sorts. Its walls have developed cracks rainy water pours in. The woodwork has lost colour. If the situation does not soon be handled in good manner, days are not far when the city will lose one of its historical monuments.