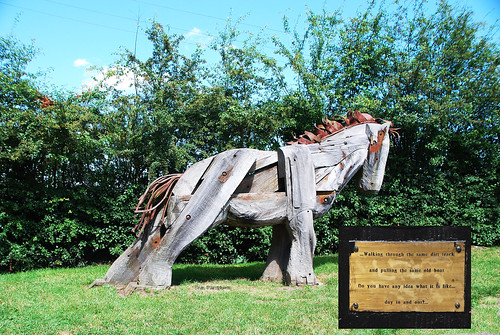 This fine piece was recycled from canal lock gates…so fitting for the subject.
Nantwich Marina (at SJ639528) is at Basin End, the meeting point of the former Birmingham and Liverpool Junction Canal and Chester Canal, now both part of the Shropshire Union.Sculptures by the canal in this area form part of a community art project, including the ‘Nantwich Horse’, by John Merrill,(woodwork) and Julian Taylor (ironwork) constructed from recycled lock gates, hinges and bolts, which won a National Waterways Renaissance Award from the British Urban Regeneration Association in 2006