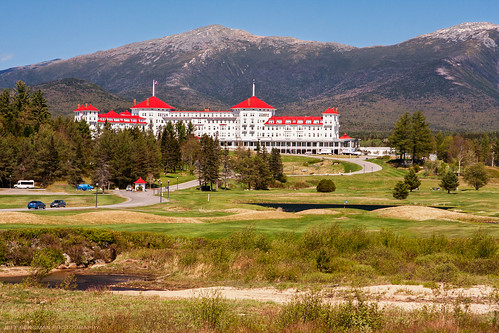 On a July day in 1902, at a the Mount Washington Hotel in Bretton Woods, owner Joseph Stickney stood before the crowd and proclaimed: "Look at me, gentlemen, for I am the poor fool who built all this!" Stickney was a Robber Baron-era businessman who made his riches as a coal broker. Within a year Stickley was dead at the age of 64.

Ground was broken in 1900 and construction was completed in 1902. Two hundred and fifty Italian craftsmen, skilled in masonry and woodworking, were brought to Bretton Woods and housed on the grounds. On July 28, 1902, the front doors of this Grand Hotel opened to the public with a staff of no less than 350. A guy from New Jersey, Thomas Edison turned the lights on for the first time at the opening ceremony.

It was the early 1900s and trains unloading the families of the country’s wealthiest people still came 35 to 50 times a day. Wives and children would stay for the entire season. The pastimes here were turn-of-the-century favorites such as horseback riding, hiking, golfing and watercolors. Guest would have meals in a restaurant three times a day and changing one’s clothes four times a day was commonplace.

Mount Washington’s fall from grace was caused by a multiple of factors including: Prohibition, the Great Depression and increasing affordability of the automobile. By the mid 1930’s the hotel was on the decline by the time and World War II was the final nail in the coffin as the hotel closed in 1942.

In 1944, a Boston syndicate bought the property for roughly $450K and, that same year, at the war’s conclusion, the world’s economic leaders met at Mount Washington to hash out the international money situation. Here, the Bretton Woods Monetary Conference established the World Bank and the International Monetary Fund. Diplomats from 44 countries set the price of gold to $35 an ounce, essentially establishing the U.S. dollar as the spine of global exchange. At the end of the conference the lead delegates signed the documents at the Stickney’s dinning room table in the "Gold Room" which is now perserved as a historic site.