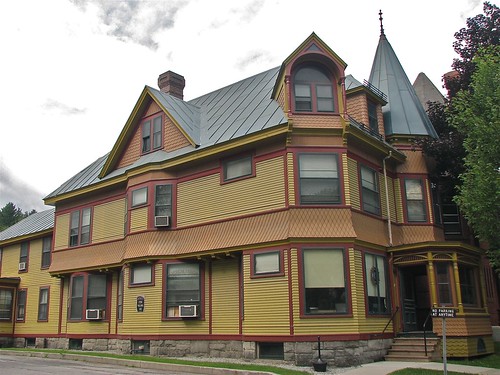 126 State Street, Montpelier, Vermont USA • This wood frame home of two and a half stories was built in the Queen Anne style, which dominated architectural fashion at the time. This style was characterized by a steeply pitched roof of irregular shape, usually with a dominant front-facing gable, and the employment of devices for avoiding flat wall surfaces, such as bay windows, projecting towers, and the use of several wall materials of differing textures to avoid a smooth-walled appearance.

After nearly forty years of Adams family ownership, John and Eliza Adams sold the property to the State of Vermont for $14,000 on March 31, 1945. It has been used for state offices since that time, with the state headquarters of the American Legion occupying a portion of the building since 1949. Most of the large, elegant rooms in the house have since been partitioned for office space, but much of the finely crafted oak woodwork and paneling remains intact and in good condition. …

Along with the American Legion, the state headquarters of the Veterans of Foreign Wars and the office of the Governor’s Commission on Women are currently housed in the building as well. – from the Vermont Historical Society’s report, "The Capitol Complex: Change, Loss and Renewal".

☞ This structure, as a one of 450 in the Montpelier Historic District, has been listed on the National Register of Historic Places (#78000246), since 1978.
– – – – – – – –
☞ Shot during a visit to Montpelier, Vermont, to participate in the Third Annual Worldwide Photo Walk, one of 1,000 locations around the world where photographers meet-up & shoot away, all on the same day. • Why? More info.