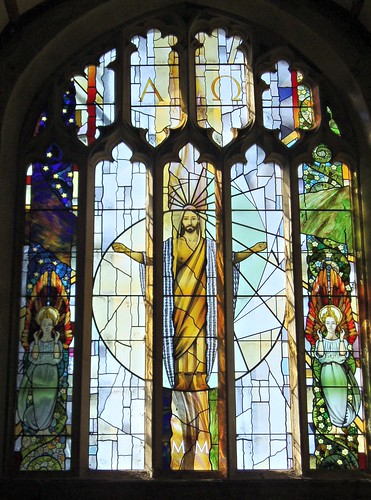 West window installed in 2000 and designed by Graeme Willson of York. Christ Is shown as Alpha & Omega and flanked by angels. The alternate columns of coloured and clear glass are most effective.

St Laurence’s at Rowington is an unusually shaped building with a central tower that appears to have been built partway into the nave, dividing it into two shorter segments either side of the ‘crossing’ and giving the it an odd ‘three chambered’ look. The interior is thus a little confusing, with nave aisles that are strangely short and narrow, whilst on the north side is a more generous aisle that extends from the tower to the east end of the chancel. Bodley did some renovation and redecoration here, but only a small patch of his stencilling remains in this aisle roof.

There is some old woodwork in the chancel screens but otherwise the glass is the main point of interest, with a window of 14th century fragments (mostly grisaille) and some good quality windows by Kempe, a late Arts & Crafts piece by Camm’s , and a striking west window done for the Millennium designed by Graeme Willson of York, some of the cartoons for which are displayed in the adjacent aisle.

The church is normally kept locked without keyholder information. For more see its entry on the Warwickshire Churches website below:-
warwickshirechurches.weebly.com/rowington—st-laurence.html

I am due to give a 40 minute guided walk around the church’s windows on the morning of Saturday 21st June.
www.passionatespirituality.org.uk/wp-content/uploads/2014…