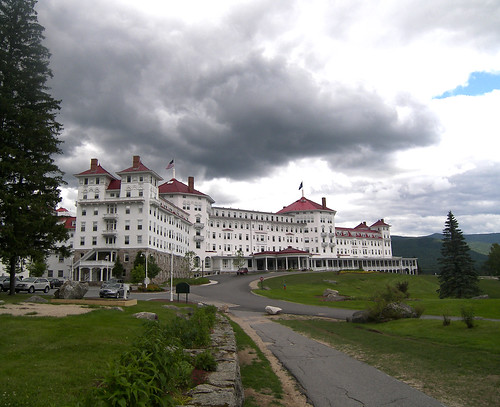 where, for a hundred years or more,
the elite from Boston, New York, and
elsewhere, came for the best scenery,
fantastc cuisine, and luxurious accomodations…
It’s all of that, and more, and has changed, very little,
sinse it’s early beginnings.

Ground was broken in 1900 and construction was completed in 1902. Two hundred and fifty Italian craftsmen, skilled in masonry and woodworking, were brought to Bretton Woods and housed on the grounds. A new type of power plant served reliably for over 50 years.

Imported china, hand-colored postcards and playing cards and a 1917 travel guide — genteel mementos of an elegant legacy. On July 28, 1902, the front doors of this Grand Hotel opened to the public with a staff of no less than 350.

The most luxurious hotel of its day, The Mount Washington catered to wealthy guests from Boston, New York and Philadelphia. As many as fifty trains a day stopped at Bretton Woods’ three railroad stations. One of these stations, Fabyan’s, is now one of the Resort’s dining establishments.

You can see Babe Ruth’s golf locker at The Mount Washington Hotel.

The Hotel has been host to countless celebrities, including Thomas Edison, Babe Ruth and three U.S. Presidents.

In 1944, The Mount Washington hosted the Bretton Woods International Monetary Conference. Delegates from 44 nations convened, establishing the World Bank and International Monetary Fund, setting the gold standard at $35.00 an ounce and designating the United States dollar as the backbone of international exchange. The signing of the formal documents took place in the Gold Room, located off the Hotel Lobby and now preserved as an historic site.

In 1955, the Hotel was sold to Mr. and Mrs. Morris J. Fleisher of Philadelphia, who operated the Hotel for 15 seasons until its sale in 1969 to Mount Washington Development Company. This company developed the popular Bretton Woods Ski Area and reacquired many out-parcels, thus consolidating the original Stickney Estate.

Bretton Woods Corporation acquired the property in 1975. Under its ownership, The Mount Washington Hotel was listed in the National Register of Historic Places and 6,400 acres of beautiful woodlands were sold to the United States government for inclusion in the White Mountain National Forest.

In 1986, the United States Department of the Interior recognized the historical and architectural significance of The Mount Washington Hotel with a National Historic Landmark designation. The 1896 Bretton Arms Inn, a Victorian inn located on the Hotel grounds, was also awarded National Historic Landmark status as part of the designation given The Mount Washington Hotel.

In 1991, a new chapter in the Hotel’s history began as a group of New Hampshire businessmen joined forces to purchase it and the surrounding property to ensure its place in the 21st Century. Subsequent purchases of the Resort’s two golf courses, surrounding development land and New Hampshire’s largest ski area, Bretton Woods, successfully reunited all original Resort properties.