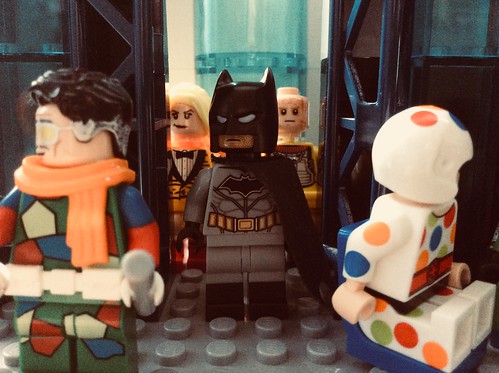 Drury- Ok, ok. Maybe I did inspire a few C-Listers but really, what’s the harm?

Dent- What’s the harm? Mr Walker, before you, supervillainy was an art form, it was something you turned to out of a necessity, perhaps for the thrill of it, after being shunned by society, spat on by the masses. When you became a supervillain you became something to be feared: Edward Nashton, Oswald Cobblepot, Basil Karlo, may he rest in peace. These are the names that give children nightmares and yet: they had class, they garnered respect from the inmates of Blackgate Prison. Until you came along. Once you put in crooks heads anyone could be ‘super’, they all started crawling out of the woodwork. The Joker will always be feared. The Eraser never will be. C-Listers proved supervillains could be laughed at, could be hurt, could be killed. And people stopped being scared. They reopened Arkham just to house you morons! So the ante had to be upped, in order to regain that fear. Victor Zsasz keeps a count of victims all over his body, hundreds of tallies, hundreds of kills! Dollmaker made a patchwork of body parts from still breathing Arkham Guards! Roman Sionis butchered Catwoman’s family and made her sister eat her husband’s eyes! His fucking eyes! You did this! So, every time Killer Croc chows down on some missing kid, just remember, that’s on you!

Drury- I thought I was on trial for creating nobodies. I didn’t realise we were studying supervillainy throughout time.

Anarky- You are. And for creating these extremists. Joker wouldn’t have cut off his face if you didn’t make them all into laughing stocks! I speak for justice. Against corruption and cruelty! I’ve made my choice, it’s now up to our jury to make theirs. Session adjourned, we shall reconvene after lunch

Batman- Stay here, don’t get into any trouble

Gar- Trouble? Me? You don’t know me at all

Miranda- Where are you going?

Batman- I’m going to have a chat with Mr.
Dekker.

Dekker- Peh! What am I, King of Cats?! No, I said if she wasn’t my daughter! Wasn’t! Completely different! Hmm? Oh, Batsy, my boy! How the devil are you?

Dekker- Well, there are plenty of men here. By which I mean, there just are, not like-. This isn’t a male strip club is what I meant to say. Or is it? haha. It isn’t.

Batman- Montgomery Sharpe. Where is he?

Dekker- Oh him! He’ll be upstairs.

Coyne- This was unwise Abner, coming here. Dekker tried to kill us!

Dekker- Garfield! Mrs Moth! My darling children! Care for a blow of my liquorice pipe? To be clear, I meant my pipe, not my dick. Unless-

Dekker- Ah, whatever. Garfield? Want to get high with your buddy Dekker? I think it’s weed although it could be crack. I don’t know, I’m blind!

???- It take it this isn’t a chance encounter, Batman?

Batman- No. I see you’re up and about. I was unsure you’d *ever* get out of that coma. You’re lucky you survived.

Batman- Why him? Why Walker?

???- I’d be doing jobs since I was a kid. I was assisting in robberies age 12. And I never failed. Not once. Then I had to partner up with him. I was going to be executed. Executed! Because of Killer Moth! If not for that Vigilante bloke, perhaps I would’ve been, instead, I had to settle for being comatose. And once I woke up, I discovered I had been forgotten! That’s the only thing worse than death Batman- obscurity

Batman- Tell me about the Moth

???- A stroke of genius, no? I needed something to push those Golden Age goons over the edge. A Moth God, proclaiming its leadership would really get them talking. About Walker, about his role in all of this. As for Tarantula, see, she’s one of my agents, to turn Rigger against him. She did go a bit off script in the end *sigh*, luck isn’t *everything* sadly…

Batman- All of this… for what?

???- Revenge. And, as luck would have it, it’s worked. The court will have come to a decision right about now. And it doesn’t look to be in his favour.

Batman- Maybe. But when I drag you kicking and screaming into Penã Duro, he’ll go free and you’ll be sent off to Belle Reve. It doesn’t matter how much luck you have Chancer, this is one fight you won’t win.

Chancer- I wouldn’t count on that.

Batman- Have you never played roulette? Always bet on bla-

Batman- Lynns, what are you babbling about?

Gar- *hic* Wha-wha are *you* babbling about?

Chancer- What was that about kicking and screaming, eh “Bruce”?