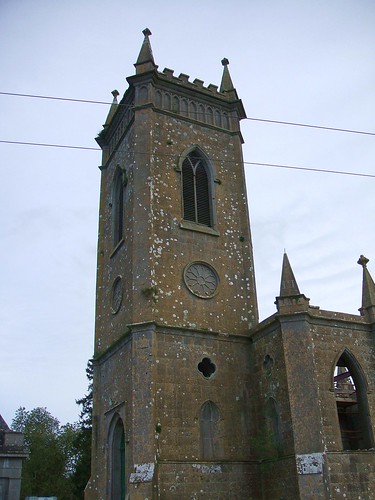 Restoration work is well underway at St Bigseach church at Kilbixy, Westmeath. In Addition to reroofing the entire nave, a new hall will be included and funded by Leader (Westmeath Community Development).

Internal floors and staircase within the tower have been removed. The old woodwork was riddled with decades of woodworm and in a dangerous state.

Urgent and remedial work was necessary to prevent the church walls from collapsing. After much of the roof collapsed one night in the early 60’s it meant that many of the roof beams were no longer in place to provide structural support to the walls and keep them upright. Work has now been completed to stabilise the wall structures and prevent them from collapsing. Work is now progressing to re-roofing the entire structure.

Steel girders are being placed across the structure to provide addition ties to keep the walls in place as well as providing a support for the new roof beams (as at 17th April 2012). The new roof will extend the whole length of the church replacing that which collapsed about 50 years before. The large stained glass behind the alter has been shielded to protect it while work is in progress and the other cross-hatch 19th century iron windows will need to be partially reglazed.

An interesting feature is the reopening of the undercroft with its red brick barrel roof that leads to beneath the alter area. The floor is an accumulation of soil with a few scattered fragments of human bones. The undercroft will also be restored, used for storage and perhaps as a boiler room.

Brand new toilets and a large septic tank to the north side of the church are being installed as well as disabled access facilities.

I will be very keen to see the interior and clock tower after restoration. Sadly, the church lost it magnificent 19th century Gurney cast-iron heater and organ loft after its roof collapsed all those years ago.

.
www.hevac-heritage.org/victorian_engineers/gurney/gurney.htm (Scroll down to see typical examples of a Gurney heater similar to the one that used to be there).