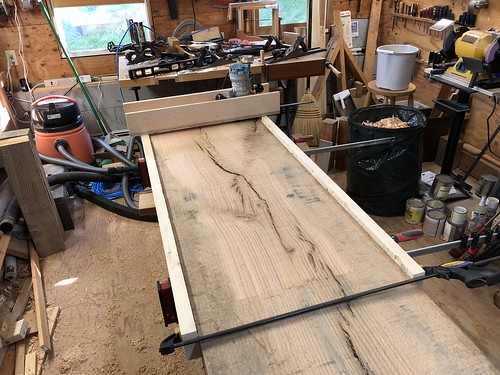 I considered whether and how much to worry about flattening the underside of the benchtop. In one of his videos, Christopher Schwarz suggests it’s not necessary to get crazy about this, but it seems like getting it at least close would remove some possible challenges to joining the legs to the top.

Plus it’ll make me happy knowing that it was done.

Plus I already had the sled made and the rails from when I recently flattened my old bench, so it was just a matter of leveling the rails and going at it.

It will take quite a few passes: there was a serious hump ("what hump?") on this face of the slab. What you see represents about four passes; the hump was steep enough that the small bites I’m taking on each pass has only allowed me to cover the middle part of the slab. Four or so more ought to get me close to edge-to-edge, then I can shift to the other half of the slab.

Which is because I can only do half the surface (lengthwise) at a time, because my rails aren’t long enough. Didn’t want to hassle with fetching 10′ 2x8s from the home center. This should get the top flat enough, and if I care about it, I can easily get it even flatter by hand once the bulk of the waste is hogged off by the big ol’ router bit. Don’t expect to care that much, flat-ish will do.