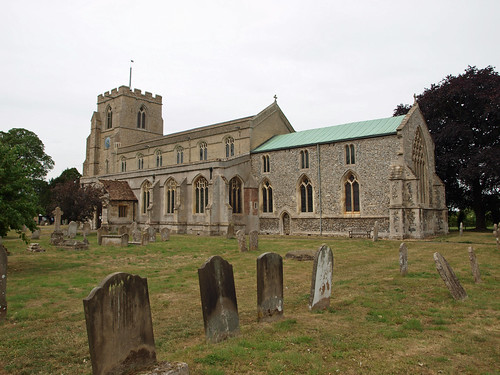 GOING WALK-ABOUT IN BALSHAM CHURCH.
Thank you for coming to our Church. This is not a detailed guide, but one for you to use as you walk about our Church and its grounds. Remember in a Church the Altar end is East; the Tower West; and the sides North and South.
What you see is from the mid-1200s to the mid 1400s. What came before? This is the highest point in Balsham and from early Christian times here probably stood a church. In 1014 the Danes invaded East Anglia and returned by way of Balsham to the Essex coast. They tossed up the babies and children on the points of their weapons, killing all bar one man who defended himself in a Tower: were it not of stone the Danes could have burnt it, so maybe here was a Saxon church – why else a tower in a village ? So you stand in a place of turmoil and peace and, as you come into this Church, try to visualise the people here before you; try to understand why they came; and in that company place yourself.
In 1035 Balsham parish became the property of the Monastery of Ely (the landholdings are mentioned in the Domesday Book of 1086); in 1109 when the Bishopric of Ely was founded it became the property of the Bishop and here he had a residence for it was a convenient stage on the journey between Ely and London. It was because of ecclesiastical connection and not because of any large population that such a big church was built in Balsham.
Though there is evidence of older stonework, to judge by its style the church in which you now stand was built in the mid 1200s, perhaps at the behest of Hugh of Balsham, Bishop of Ely, 1258-1286, and founder of Peterhouse, the oldest Cambridge College.
STAND BY THE NAVE ALTAR With your back to the Screen face the Tower; high on the wall you will see an old roof line; extend that slope sideways half-way into the aisles and now you can visualise what was here in the 1200s, a Tower, single chamber Nave and a Chancel.
Behind you in the Chancel you will later see the Brass of John Sleford, unless you are here in winter when it is covered by carpet. The inscription records that it was he who built the Church and gave the Chancel stalls. Probably that was about 1384 from which year there is a record of a £400 debt of his later marked "paid." The older Nave was demolished and what you now see was built with Aisles on either side. The Aisle windows were filled by stained glass, remains of which are in the tracery of the North side. This glass would have made the church fairly dark but light would have come down through the Clerestory windows above the arcade. Above the Screen there was a gallery or loft which bore a crucifix, with statues of SS. Mary the mother of Jesus and John the beloved disciple (hence "Rood" Screen from the Saxon word "rood" meaning crucifix). The Screen had a canopy added c. 1440s. Thereafter (save for pews and Font cover) the church has remained virtually the same.
STAND NOW AT THE BASE OF THE TOWER On the floor to your left is a large Saxon (pre-1966) grave stone; imagination suggests it may be the stone of the man who in 1014 defended himself in the Tower before this one. Also on the floor is a stone with a cross (maybe a "consecration cross" from an earlier building). Pieces of stone moulding (and corbels not on display) were found "re-cycled" into the 1200s buttress that had completely to be re-built in 1986-1988. The Tower brings together technology over 700 years. In 1589 the exterior buttresses were thickened and increased in number; in the 1870s there was a proposal completely to re-build the Tower on its foundations; in the 1970s a concrete "sleeve" was created inside the Tower (on top of 24 inches of concrete) and to this the exterior material was "stitched."
There is a spiral staircase in the S W corner of the Tower, blocked at lower level, though still in use higher up to get to the top. Above your head is the concrete grillage of the next floor, above that is another on which rest the foundation beams of the new bell installation, brought to sound in 1989. On the wall there arc an old bell wheel, two clappers, and bell ringers’ notices. There are now six bells, the oldest c. 1530s cast by John Tonne, an itinerant bell founder who might have cast the bell inside the church itself, as was often the custom. There is a separate Guide for the Bells.
On the south wall you will see the Hannoverian Royal Arms of the style 1714-1804, probably painted in the early 1700s.
LOOK AT THE FONT. The stone bowl is from the 1200s; once it had a flat lid but in the mid 1930s the then Rector John Burrell (amongst whose many gifts was carpentry) made the cover as his gift to the church. It has as counterweight a World War I howitzer shell which can be seen inside the top lattice work. About the church are other examples of his work and, in the North aisle, is his memorial window with the appropriate figure of S. Joseph the Carpenter.
GO ACROSS TO THE NORTH AISLE AT THE WEST END.

RETURN TO THE PORCH, FACE SOUTH ACROSS THE CHURCHYARD. To your left, on the ground by a bush, is the base of the old Churchyard cross, destroyed probably during the early Reformation era of the 1530-1550s. Ahead of you is the new Cross, a World War I memorial designed by F.E. Howard (who also designed the Font Cover). The shaft of the cross is a single piece of stone; the top is another single piece, carved on the one side with Christ on the Cross and beside him SS. Mary and John, on the other Mary and the child Jesus.
BUILDING PLANS. For some years now we have been considering alterations at the west end of the Church. There is one "Grand design" for enclosing the last bay of the nave and two bays in either aisle which f ould have provided accommodation at lower level for warmer meeting and junior church rooms with a kitchenette and lavatory in the tower and then, at upper level, a balcony floor and, in the tower, an enclosed chamber for bell ringers. It is presently a very cold church tower, especially in winter ! That for the time being has had to be set aside but the overall plans and faculty permission are there to be brought into operation at some suitable moment. As usual, it all depends on money!

Maintaining an ancient Church, and trying to adapt it for modern expectation, is a compound of privilege and frustration, complicated by tensions of "conservation" and "use." There are many people who help us along the way and it taken patience and a great deal of money. If you can help by donation we should be grateful; there is a box in the church (cleared regularly because of thefts). Gift Aid and Covenants are better ways of providing regular funds for they are "topped-up" with tax refunds. Donations can be more widely spread by way of the Cambridgeshire Historic Churches Trust (local) or the Historic Churches Preservation Trust (national).