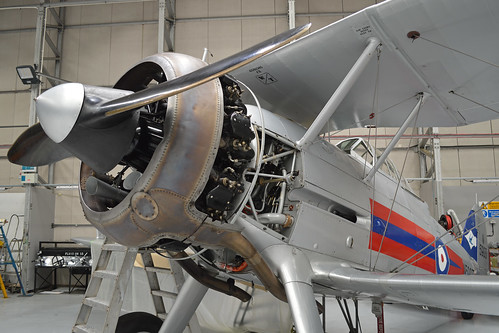 Actually built as a Sea Gladiator but converted during restoration into a straight Gladiator, she still wears her genuine serial.
Operated by TFC and Duxford based, she is seen during maintenance in Hangar 2 (South) at the Imperial War Museum, Duxford, Cambridgeshire, UK.
23rd July 2016.

The following info is taken from the ‘Fighter Collection’ website:-

“Our Gladiator, N5903, was the last of 25 Mk.II aircraft built under Contract 773235/38 and delivered in 1939. It is believed that she briefly served with 141 Sqn in October 1939 at Grangemouth, west of Edinburgh, and was then allocated to the Air Ministry Development Pool as a flight trials platform in December 1939. Following this it is understood that N5903 was placed in long-term storage with 27 Maintenance Unit at Shawbury in May 1940, until she moved on to 8 MU at Little Rissington in October 1943 and then subsequently to 61 Operational Training Unit at Rednal in November 1943.
N5903, along with her Shuttleworth sibling Mk.I L8032, was earmarked for meteorological survey work and returned to Gloster at Hucclecote for conversion in January 1944. This conversion did not happen as more modern types took on these duties and the two Gladiators were left forlorn at Hucclecote, which was probably what saved them from being scrapped.
The next few years saw them remain with Gloster, somewhat forgotten whilst the main focus was on the war effort. After the war in February 1946 it is known that famous wartime Ace and future test pilot, R P ‘Bee’ Beaumont, flew our Gladiator, N5903, on four occasions.
In 1950 the Gladiators were handed over to Air Service Training for ground instructional use with N5903 going to Ansty, near Leicester, and L8032 going to Hamble. When the Ansty School closed N5903 saw the pair on a visit to Hamble, and as an ex. Fleet Air Arm Sea Gladiator pilot during the war he had an affinity with the type. Following a successful bid of £1 each he became the proud owner of a pair of somewhat forlorn Gladiators.
Viv Bellamy moved the pair of biplanes to the nearby Eastleigh base of his air charter company, Flightway. It was here that that the task of getting one of the Gladiators back into airworthy condition, unfortunately N5903 was chosen as the donor aircraft in favour of L8032, even giving up her Bristol Mercury VIII engine that had just eight hours logged since being installed.
Following being ‘cherry picked’ to support the successful rebuild of L8032 that culminated in her flight in 1952, N5903 languished in the back of the hangar until both aircraft were sold to Gloster for a token sum of £50. L8032 attended displays across the country for the next few years in the hands of Gloster. Little however, is known about the movements of N5903 in this intervening period. It is assumed she accompanied L8032 when she was presented to the Shuttleworth Trust in 1960. In 1971 N5903 was loaned by the Shuttleworth Trust to the Fleet Air Arm at Yeovilton. She was in a sad state when she arrived at Yeovilton, with no engine, propeller, or spinner.
Following refurbishment work our Gladiator was placed on static display in 1978 at Yeovilton in a spurious Fleet Air Arm colour scheme as Sea Gladiator N2276, complete with a dummy arrestor hook under the rear fuselage, wooden flaps and a glass-fibre spinner.
Following purchase from the Shuttleworth Collection the Gladiator joined The Fighter Collection fleet in 1994, arriving by road at Duxford from Yeovilton on December 1. Due to other priorities within the collection our Gladiator had to take her place in ‘the queue’ and progress with the rebuild was initially slow. By 2004 she started to show signs of real progress following the results of concerted efforts by the TFC Engineering Team and the contracting out of the fuselage woodwork to Skysport Engineering. In 2006 the rebuilt wings were trial-fitted to the fuselage which had her looking much more Gladiator-like once again. 2007 saw the fabric work completed by Vintage Fabrics, who also applied the wonderful 72 Sqn scheme she wears today. As an aside 72 Sqn was the first frontline RAF squadron to be equipped with Gladiators at Hornchurch, Essex in March 1937. The Squadron colour scheme consisted of red and blue bars along the fuselage sides and on the upper surface of the top wing, all of which are faithfully replicated on N5903. In addition to these markings our Gladiator also wears the blue fin and forward tailplanes denoting the personal aircraft of the ‘B’ Flight commander. By late 2007 the re-covered and painted wings were refitted, this time permanently, to the fuselage and N5903 became the main topic of question from the public, mainly “when will she fly?” to which the answer was always a cautious “when she is ready”.
The first post restoration flight for our Gladiator was a low-key affair occurring in the week running up to Flying Legends 2008, on Thursday 10th July, with TFC Chief Pilot Pete Kynsey (PK) the man in the hot seat. Only a few days later N5903 looked resplendent sitting in the sunshine on the flightline garnering a great deal of attention from the visitors to our world famous airshow. It was on the Sunday of the airshow with the flightline walk just about to close, when PK could be found once again strapping himself in and to the delight of the gathered crowds N5903 taxied out and took off for a test flight. Unfortunately due to a number of factors these were the only flights N5903 undertook and she was returned to the hangar. Over the next few years she underwent some minor work which culminated in a test flight on Wednesday 1st May, 2013, with PK at the controls once again. Since then it has been a popular performer, even undertaking the ‘Joker’ routine at Legends on more than one occasion!”