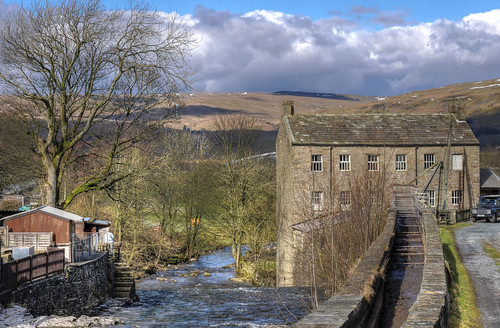 Gayle Mill, dating from about 1784, is thought to be the oldest structurally unaltered cotton mill in existence. It is located in the Wensleydale hamlet of Gayle, one mile south of the market town of Hawes. It lies within the Yorkshire Dales National Park, and had become an important tourist attraction.

The Grade II* listed mill was built by local hosiers and land owners Oswald and Thomas Routh as a water-powered cotton mill, and was powered by a 22 feet diameter overshot waterwheel. It was turned over to flax and wool spinning by 1813 for the local knitting industry. For a period in the 19th century, it was used for domestic accommodation.

It was converted to a sawmill around 1879, powered by a double-vortex turbine, thought to be the only remaining working variety of its type. In its heydey, the turbine drove a range of woodworking machinery – a rack sawbench, circular saw, planer and lathes – by a series of belts and pulleys off a central line shaft.

Gayle Mill closed in 1988 after over a century of operation as a sawmill, and it seemed likely it would be converted into luxury flats. Following its successful appearance on BBC2’s Restoration programme it was restored over four years at a cost of over £1m. Gayle Mill re-opened to the public in 2008.

Unfortunately it has now closed again for further repairs and is not due to re-open to the public until Easter 2019.