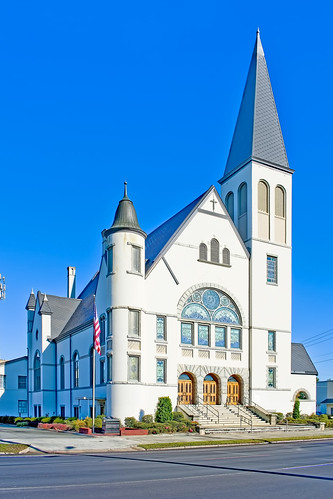 THE BEGINNING: First Baptist Church of Valdosta actually began in Troupville over 150 years ago. The first settlers came to South Georgia in 1821. On June 21, 1840, a Missionary Baptist Church organized at the home of James O. Goldwire. First Baptist was originally constituted under the name of the Little River Baptist Church. There were seven charter members, two of whom were black.

THE EARLY YEARS: Over the next four years worship services were held in homes and the Court House. Their new church building was completed in 1844 and given a new name, Troupville Baptist Church. In1842, $20 was subscribed for missions. Soon after, Central Church, “An Arm of the Church,” was built about ten miles away. Slaves were among its members. In 1847, Ebenezer, another “Arm of the Church,” was formed some twelve miles away.

THE MOVE TO VALDOSTA: The coming of railroads necessitated a move to the new town, Valdosta. In 1860-61, members dismantled their church building, including the church bell, and moved to the corner of Valley and Ashley Streets. About two years later, the building was wrecked by a storm, and for the next three to five years worship services were held in a school house. In 1863, the minutes refer to the church as the Baptist Church of Christ. From 1865 to 1907, it was called the Baptist Church of Valdosta.

THE SANCTUARY: In 1896 a lot on Toombs Street between West Central Avenue and Valley Street was purchased and construction on a new church building began. After four years, on November 18, 1900, the church was dedicated debt free, to the glory of God. Records do not indicate the cost, but by June 1893, a total of $13,000 was spent on the building. The children of the Sunday School classes bought one brick each and a fund-raising campaign in 1899 netted $6,000. The curly pine woodwork was donated by W.S. Fender. The stained glass in the windows is reputed to have come from Italy. On December 13, 1908, the Organ Committee recommended the purchase of a Pilcher organ, the maximum cost set at $3,000. Other buildings added were the Sunday School Annex to the Sanctuary in 1926 and the Children’s Building and the Langdale Chapel in 1956. Our present Children’s Building was constructed in 2006 and the old children’s building was renovated into adult education space in 2007. It was dedicated in honor of Mac Weaver, our Associate Pastor for over 43 years.

On January 10, 2016 our new Family Life Center was dedicated to the glory of God with an emphasis on carrying on the ministry of God from “Generation to Generation: G2G”. The modern building includes a youth facility on the second floor and a large fellowship hall which is used for 8:44 contemporary service, concerts, banquets, church family meals and much more.

LONG TENURE PASTORS: According to the official church history, First Baptist Church has been blessed with dedicated pastors who served for a number of years. The first pastor, William B. Cooper served 14 years from 1840 to 1854. William H. Goldwire served 14 years from 1854 to 1868. T. Baron Gibson served 18 years from 1935-1953. James P. Rodgers had served 14 years when he died of a heart attack in June of 1967. The 20th pastor, James E. Pitts, served 23 years from 1967-1990. During Reverend Pitts’ ministry, 2,942 people were received into FBC fellowship. Delos Sharpton came to FBC in August 1991 and served as our pastor until November 1999. Dr. Ches Smith served as our Interim Pastor from January 2000 until July 2001. On the first of August 2001, Dr. Philip West was welcomed into our church family and served until March 2013. Dr. Milton Gardner, who served as pastor of First Baptist Church in Thomasville, Georgia for 31 years, served as Interim Pastor from April 2013 until July 2014. After continuous prayer for God’s will, our committee found the person God chose to be our next pastor. In August 2014, Charles “Chuck” Owens joined the FBC church family serving as our Senior Pastor.

Credit for the data above is given to the following websites:
fbcvaldosta.org/
qpublic.schneidercorp.com/Application.aspx?AppID=631&…

© All Rights Reserved – you may not use this image in any form without my prior permission.