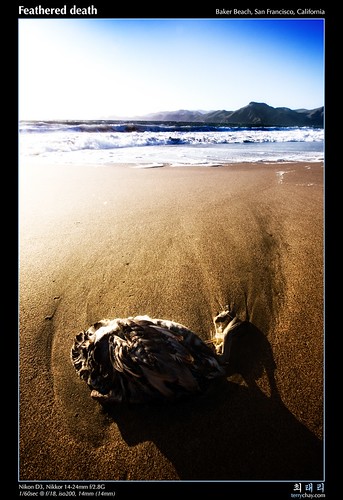 While returning to the car, I passed near a seagull looked at me guiltily and then flew away. I was curious what it was looking at and noticed that it was a dead bird whose legs had been caught in some cloth flotsam and had been washed ashore.

This photo was taken handheld in aperture mode which was adjusted to have as much depth of field possible and still be well above the shake limit. The 14mm has no trouble focusing close but the dust on the lens left a lot of blemishes that appeared easily after post processing. I’m going to have to look into a good portable cleaning solution as the surface would take forever to clean with a LensPen. I remembered to bring my GPS with me (with batteries) so the location data is accurate (though I forgot to adjust my camera for daylight savings time so I had to shift things over 3600 seconds).

I used dodge and burn to try to reclaim some dynamic range in the overexposed background (burn) while getting some feather detail in shadow (dodge). The spot & patch algorithm was very poor for dust spots in the sand so I had to heal that (as well as lens dust) in Photoshop.

I used contrast color to get better separation between sand and sea, a bi-color to magnify that effect even more and “postcard” the image without messing with the saturation, and then bleach bypass and glow to create the otherworldly look around the dead bird. Most of these filters were not applied to the bird itself using a negative u-point.

I tested the new dodge and burn tool in Aperture 2.0.1 update. It worked very well, but I’m disappointed that it has to generate a TIFF file in order to work. It’d be nice if it used the RAW file and just stored sidecar files that had the masks. The weird thing is if you edit using an external editor and then edit in Photoshop, it loses the version with your dodge and burn edits. In fact, 2.0.1 and 2.0 before it has introduced many, many bugs involving preview generation and versioning. For instance, if you replace the PSD file or edit a PSD file that you’ve already commented, it will reimport the EXIF and IPTC information and smash all your edits in Aperture. Besides the fact that you can no longer use the PSD-replacement trick (to preserve metadata from external creation tools like PTMac and DxO Optics Pro via PSD generation), it destroys all your IPTC work you might have done before round tripping with Photoshop. That is stupid. Another example is preview generation on expanded canvases with a alpha channel that has been colored in are rendered transparent no matter what in the original and then exported as black. So effectively those parts of the image become unusable! (Workaround: save a copy as PSD with alpha unchecked and than overwrite the current PSD) WTF? I mean this stuff worked in Aperture 1.0. Apple has taken the common-sense way of handling versioning and trashed it in order to make room for the API which isn’t really ready yet. They could have done much better if they asked the service to generate previews and gave it the ability to store sidecars. This would be far more versatile than the current stuff which is no better than Photoshop at this point (though the RAW rendering support will be change that for us DxO Optics Pro users). There is no need to actually save the rendered TIFFs—and why TIFF anyway? Those files are huge. Why not store losslessly compressed JPEG2000s are 1/2 the size of TIFFs for photos).

By the way Aperture 2.0 lost support of JPEG2000. (It was buggy in Aperture 1.0). That’s bad because I save my scanner output as high quality JPEG2000’s since they have 48bit dynamic range and yet are about 1/20 the size of a TIFF with almost no noticeable loss in quality. Support all Quicktime-compatible image formats for import! This is why I buy expensive computers, Apple. (Thumbnails should still be JFIF (JPEG) simply because the algorithm for working with JPEG2000’s seems a bit slow even on a fast computer.)

When I do a lot of Photoshop and Aperture 2.0 work, the hard drive starts swapping in a bad way and won’t stop. Very frustrating. What should have been a 15 minute postprocessing ended up wasting 3 hours because of bugs in Aperture and swap.

Finally, I decided not to provide the full resolution versions of the images and added a border around the image (but no watermark). This should still be good enough, if not better, for use under the Creative Commons in websites and blogs, but if you need a print-quality (larger than postcard size) version of the photo, this way you’ll have to contact me for the image. The border design and information is a rip-off of various parts from my favorite photographers: Kevin Kubota, Tony Sweet, Russ Morris, Ryan Brenizer, Jim Goldstein, and Andrei Zmievski.

Click for original photograph (If you cannot view this, add me to your contacts and I’ll add you to my friends. If you are already a contact of mine then just jet me a message and I’ll fix your status.)