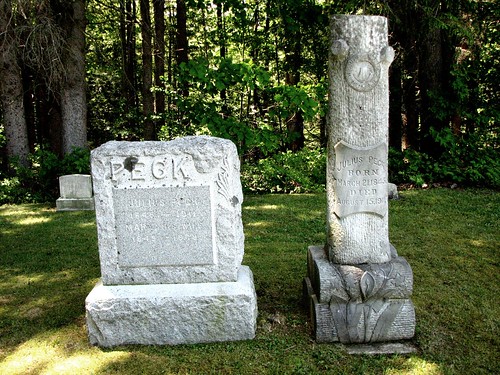 Cornwall, Vermont USA • The Julius Peck grave site in Evergreen Cemetery: b. March 21, 1845; d. August 15, 1911. • This treestone was provided by his insurance company Woodmen of the World.

WOW was founded as a Benevolent Secret Beneficiary Fraternity, by Joseph Cullen Root, on June 6, 1890, in Omaha, Nebraska. The organization offers insurance to its members and helps those in need, to this day.

• At one time in its history, WOW did offer grave monuments to families of deceased members. Sometimes these monuments have the motto “Dum Tacet Clamat,” which means “Though Silent, He Speaks” etched on the stone.

In cemeteries (mostly in the Southwest & West) you will sometimes see gravestones with “Here Lies a Woodman of the World” engraved on them. Usually these will be accompanied by a symbol like this example. Logs, along with axes and other woodworking tools, are common motifs. Sometimes the grave markers themselves will be in the shape of logs or tree stumps, called treestones. • Regardless of its shape or size, Woodmen gravestones serve as a lasting tribute to its members and the ideals of Woodcraft. They also serve the Society’s long standing motto that "no Woodmen shall rest in an unmarked grave."

• Here’s another link from the official website of Falls City, Oregon, with a nice summary & more pix. • Of course, I should have started with Wikipedia.