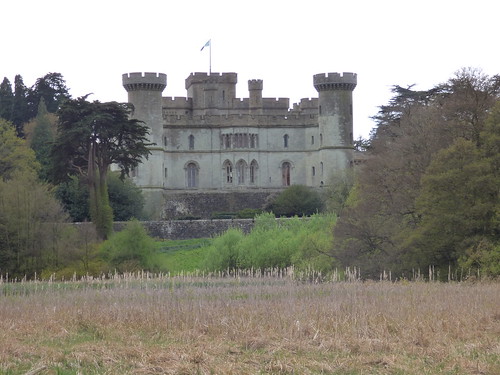 A Good Friday 2017 visit to Eastnor Castle in Herefordshire.

A look around the castle building.

The various views of the castle as seen from Eastnor Lake.

Country house. 1811-1820 by Robert Smirke for 2nd Baron Somers; internal alterations, mostly decorative by Augustus Welby Northmore Pugin, 1849/50 and G. E. Fox 1860s; Sir G. G. Scott also proposed alterations but these were not fully undertaken. Ashlar; lead and slate roof concealed behind embattled parapet; the roof trusses and floor beams are cast iron, an early example of the use of iron in domestic buildings; octagonal ashlar stacks disguised as turrets. A Picturesque, yet still symmetrical castle in a serious neo-Norman and early English style: rectangular with E-plan entrance front and flanking towers joined by short diagonal links. 2 storeys and cellars in a battered plinth; to the north- and south-east the castle is raised on a mound and has tall retaining walls. Entrance front is dominated by a boldly massed centre which raises through 3 stages and is stepped up towards the middle of the building; round corner turrets and arched parapets to the outside; projecting porte-cochere under an embattled parapet and with 3 tall round archways of 3 orders of columns which have cushion capitals. To hither side of the centre are 3:1 bays, the outer ones being advanced and terminated by tall, 3 stage corner towers which are clover leaf on plan and have corbelled parapets and single-light, round-headed, windows set in deep embrasures. The central 3 bay sections have 3-light Early English style windows on the ground floor set back in recesses and divided by flat buttresses, roll-moulded cill band below and corbelled blocking course above, behind which the upper floor is recessed with large pane sash windows in neo-Norman style surrounds which have columns and cushion capitals. The outer single bays have 3-light Gothic style windows but set in neo-Norman surrounds; plain tripartite windows on first floor. Large central double doors and simple round-headed doors at base of outer towers, that to the left leads to an outer parapet walkway at the foot of the side elevation. The north-east (side) elevation rests on a tall, battered retaining wall, and is of 3 bays, the centre being a full height canted bay of 3 windows; the fenestration is a variation of the Entrance Front. Garden elevation of 4:3:4 windows and tall corner towers as Entrance elevation. The central 3 windows are set in a 3 stage tower which is canted to the out- side. 2-light Geometric style windows on ground floor; neo-Norman style surrounds and columns to the centre; 3-light plain, round-headed windows on the first floor, but Geometric style outer windows. To the south-west of the Castle is the attached kitchen wing of 2 storeys forming a T-plan with a court on the south side; four 2-light casement windows under hood-moulds; tall, 2-stage square towers terminate the 2 arms of the wing.

INTERIOR: little of the original Smirke interiors survive. Front Staircase
Hall, redecorated by G E Fox 1860s. Entrance Hall: Smirke, probably re-
modelled by Scott, and redecorated by G E Fox in the 1860s; the carving
is by William and James Forsythe of Worcester; the dimensions are 60 feet
long by 55 feet high; Romanesque style "triforium" gallery and 2-light
"clerestorey" windows with Venetian style tracery; panelled ceiling and
braced trusses; panelled doors in neo-Norman style surrounds; decorative
stencilling in canvas by Fox. Octagon room has a coffered ceiling. Gothic
Drawing Room: the plasterwork is by F Bernasconi and Son but the painted
decoration was designed by Pugin and executed by the Crace firm in 1849-50;
fan vaulted ceiling: large, wrought, 2 tier chandelier by Pugin, 1850
but made by Hardman of Birmingham; highly elaborate fireplace with ogee
head and family heraldry, a painted family tree is above; linenfold
panelling, chairs, table and sideboard all by Pugin. Library: by G E Fox
late 1860s, in an Italian Renaissance style; find inlaid woodwork, Istrian
stone chimneypiece apparently with a representation of Garibaldi; coffered
ceiling with paintings of the Virtues and the Vices. Little Library: also
by Fox, incorporating woodwork from the Accademia degli Intronati at Siena,
1646) Malvern Hills granite fireplace and Gibbons carving from Reigate Priory
flanking the overmantel mirror. Dining Room: by Smirke but altered, painted
and panelled ceiling; panelled dado and built-in Gothic style sideboards;
furniture also by Smirke. Staircase Hall: plain staircase by Smirke, arcaded
balustrade of cast iron and wood. State Bedroom: some of the earliest work
of the Royal School of Needlework, early C20 for Lady Henry Somerset. Many
drawings and work books survive in the muniment room of the house. The
accounts for the 1811-12 period amount to £85,923 13s 11½d.

This text is from the original listing, and may not necessarily reflect the current setting of the building.