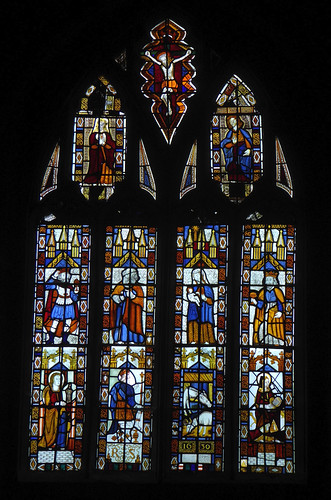 The extremely rare 1630 glass of the east window at Sellack, an example of Gothic Survival in Post Reformation England and clearly by a native (perhaps more local?) artist in contrast to the few windows of this date that survive elsewhere which are mostly the work of continental glass painters (generally working in enamels, the normal approach at this time, though not here, the technique remaining effectively the medieval one). Two other churches in Herefordshire possess glass by the same unknown maker of this window, one is the near copy at Foy church (though dated 1675, several decades later), the other is Abbey Dore which has glass of the same date and style in its east window. The subject of the main lights appears to be the Adoration of the Magi though spread throughout the eight panels (even the animals get their own panel) along with two female saints (one of which appears to be a reused 16th century panel).

My approach to Sellack church over the nearby footbridge over the river Wye and across a field with the tapering spire beckoning me on was unforgettable and a lovely introduction to the place.

St Tysilio’s church (a unique dedication to this Welsh saint in England) is a slightly strange building, in it’s present state it appears to be mostly 14th century in date but several elements of the exterior struck me as a little eccentric, such as the nearly windowless tower barely reaching above roof level but being surmounted by such a tall spire (almost double its height) and the over-large north transept that dominates this elevation of the church. The south side by contrast is a flush wall (aside from the porch) from nave to chancel but oddly punctuated by a couple of quirky gabled windows that break out above roof level.

Inside the church the quirkiness continues, with the north transept almost as large as the nave, which being relatively short seems all the stranger with such a large extra limb on one side. The north chapel beyond is also unusual in having a vaulted ceiling. The whole interior was quite dark on this overcast afternoon and I couldn’t help finding it a little disorientating.

There are some real features of interest here, some fine monuments on the north side and some handsome Jacobean woodwork in the pulpit. But what impressed me most was the glass, with a medieval panel surviving in one window but most significant is the east window which is something rarer still, Gothic Survival stained glass from 1630. Stained glass from the post-Reformation – pre-Civil War period is rare indeed and most known examples the work of glass-painters from overseas working in enamel. This window however is traditional coloured glass designed and painted by someone clearly much more local, a kind of 17th century folk art reinterpretation of late medieval figurative windows. Other examples by the same hand exist in Herefordshire (including a later near copy of this window at nearby Foy).

Sellack church is an intriguing church and happily was open and welcoming to visitors when I called.
www.visitherefordshirechurches.co.uk/st-tysilios-church-s…