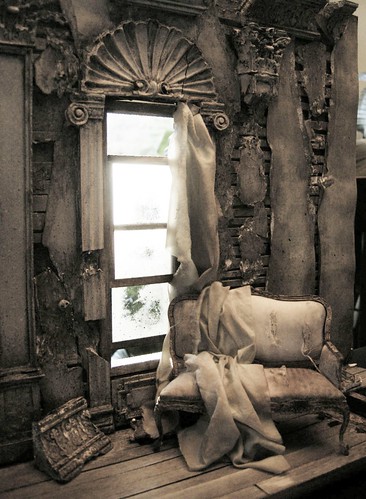 1:12 Scale,
Between September 1940 and May 1941, during the Second World War the city of London was bombed by the Luftwaffe for 76 consecutive nights and many towns and cities across the country followed. More than one million London houses were destroyed or damaged, and more than 40,000 civilians were killed, half of them in London

Kenneth Haseltine, age 48, Miniature Artist, Salem Oregon U.S.A
Ever since I was a young child I have had this obsessive need to create things. The process of making something gives me a sense of peace like nothing else in the world. When a new project first comes to mind I’ll spend most of my waking hours thinking about it, planning out details in my head, obsessing on it until it’s been finished. It’s a wonderful kind of anxiety that’s only relieved by successfully completing the project.
Miniatures has allowed me to bring together all the skills I have learned over the years from many different hobbies and apply them to this art form, drawing, painting, sculpture, woodwork, model trains, fiber art even sewing, I have tried them all, but Miniatures are my passion now and my creative focus for the last 7 years.
I approach every project with a strong idea in mind, but rarely with any firm plans, I like to let the idea evolve on its own, let creativity guide me and not be boxed in by sketches or some measurements on a piece of paper. I know this philosophy is counter to what most people believe, they have been told that in order to be successful at this hobby you need to carefully plan ahead, but this approach has never worked for me. Free your mind and the rest will follow is my motto.
I call this piece Death of a Grand Dame, like her owner’s this grand Georgian home on the outskirts of London has suffered the ravages of war, now exposed to the elements her death is imminent.
With this piece I wanted to convey the sense of loss I feel when I think about the destruction caused by war, not only the lives lost, but the architectural treasures these very people built and lived in now gone forever. I’m inspired by 18th and 19th century Architecture and its opulence. My goal is to take the viewer to another place and time if even for a split second, to imagine what it must have been like to live in that particular moment in time, to live in those opulent spaces of yesterday.
The piece is constructed from wood, cast plaster and paper.
23” (58.42 cm) long x 13” (33.02 cm) high.
.
.