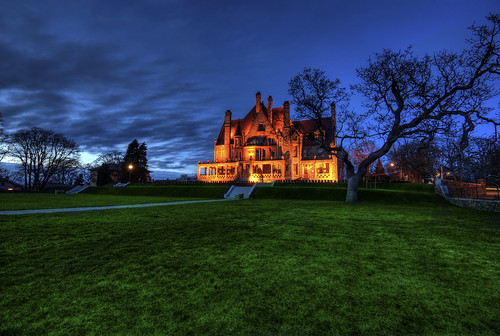 I have tried to get a good shot of this castle for years. The one thing that I’ve always hated about taking photos of Craigdarroch is that there are always a bunch of cars parked in front of the castle. Nothing ruins a 19th century castle shot quicker. I was lucky tonight that there were no cars in sight.

Craigdarroch Castle has 39 rooms and over 20,000 square feet. It was constructed in the 1890s as a family residence for the wealthy coal baron Robert Dunsmuir and his wife Joan. Robert died in April 1889, more than a year before construction on the castle was completed. His sons Alexander and James took over the role of finishing the castle after his death. The initial architect of the castle, Warren Williams, also died before completion of the castle. His work was taken over by his associate, Arthur L. Smith, in 1890. James Dunsmuir also commissioned the construction of Victoria’s second castle; Hatley Castle located in Colwood, British Columbia.

Craigdarroch Castle is believed to have cost as much as $500,000 when it was built, and included granite from British Columbia, tile from San Francisco, and an oak staircase prefabricated in Chicago. When originally constructed Craigdarroch stood in grounds comprising 27 acres of formal gardens in Victoria’s Rockland neighbourhood.

Upon the death of Robert Dunsmuir’s widow, Joan, the Craigdarroch estate was sold to land speculator Griffith Hughes for $38,000 who subdivided the estate into buildings lots. To stimulate sales during a slow real estate market, Griffiths announced that the castle would be the subject of a raffle, to be won by one of the purchasers of the residential parcels carved from the estate. The winner, Solomon Cameron, mortgaged the castle to finance other speculative ventures which failed, leaving him broke, and in 1919 ownership of the castle passed to one of Cameron’s creditors, the Bank of Montreal.

The four-story Craigdarroch Castle still has lavish furnishings from the 1890s and is known for its stained-glass and intricate woodwork. The Castle is currently owned by the Craigdarroch Castle Historical Museum Society, which is a private non-profit society, and is open to the public. The castle is a tourist attraction, and receives 150,000 visitors a year

Not for profit bloggers are welcome. I can always use the free publicity.

I do not use Getty Images. If you would like to use any of my photos, please contact me by flickrmail, or e-mail.