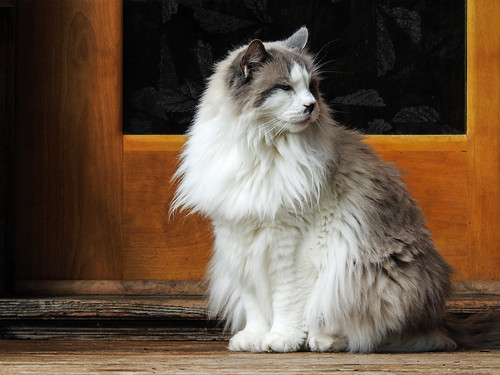 This is one of three (?) beautiful cats belonging to Keith Logan and his wife, Sandy, seen when a large group of us spent the morning of 7 July 2019 at their home and property. They live NW of Cochrane on a 35-acre parcel of land. The large group split in half and took turns to look at Keith’s stunning photography and incredible woodwork and also to bio/blitz their land, to record all flora and fauna seen. We were treated to coffee and delicious cake in Keith’s enormous woodworking barn. We all agree – if you sit in one of Keith’s wooden chairs, you’ll see that no chair could ever be more comfortable – they are simply amazing!

Some people saw a number of birds, though they were almost all very distant sightings. I think the closest were a pair of Yellow-bellied Sapsuckers, feeding young that were in a tree cavity. I did manage to get a shot of a Rose-breasted Grosbeak, too.

On a visit like this, I am always torn between looking for birds, wildflowers, or fungi. This day was a mix of all three – the kind of day I love. Actually, we were surprised that there were not many wildflowers to be seen. Not sure if this means we are a bit late for them. Our weather has been totally insane since New Year, so who knows what is early and what is late. I was happy to see the odd fungus here and there in the Aspen forest.

All morning, we were followed around the garden by the Logan’s two enormous dogs – two beautiful, friendly Newfoundland dogs, named Sally and Blueberry (?). What gorgeous dogs these are! I think food must be on their mind all the time. Whenever someone would sit and eat their lunch, either one or both dogs would come over and stand or sit and look longingly at what was being eaten. Such sweet dogs.

I love to see their cats, too. On previous visits, there were three cats, but I don’t know if they only have two now. What a beautiful place they are fortunate enough to call ‘home’.

After lunch, we drove a short distance to another place, URSA, which stands for Universal Rehabilitation Service Agency. Before non-profit URSA obtained the area, it used to belong to W.O.Mitchell, who used it as a retreat. We were introduced to Ben, who lives in W.O. Mitchell’s beautiful old cabin. Ben’s passion is creating amazing metal sculptures and many of his works are scattered on the land around the cabin.

"William Ormond Mitchell, PC OC better known as W. O. Mitchell (March 13, 1914 – February 25, 1998) was a Canadian writer and broadcaster. His "best-loved" novel is Who Has Seen the Wind (1947), which portrays life on the Canadian Prairies and sold almost a million copies in Canada. As a broadcaster, he is known for his radio series Jake and the Kid, which aired on CBC Radio between 1950 and 1956 and was also about life on the Prairies.

In 1973, Mitchell was made an officer of the Order of Canada. The list of other honours Mitchell has received includes honorary doctorates from five Canadian universities and being sworn in as a Member of the Queen’s Privy Council for Canada on November 5, 1992. In 2000, Mitchell was honoured by the government of Canada with his image on a postage stamp." From Wikipedia.

"Nestled in 18 acres of truly Albertan streams, trees and wildlife, URSA is a place that welcomes us all. The buildings and land were obtained in 2009 by Universal Rehabilitation Service Agency (URSA) with a single purpose: to create a retreat space where all individuals, regardless of ability, can experience the beauty of a relaxing and calming retreat space. We rent the URSA Retreat Centre to external groups to subsidize running it for our clients."

As far as the weather was concerned, we were so lucky. Just a few minutes of light rain and that was it. Just enough to get rain spots on the camera lens.

Thanks to Keith and Sandy for such an enjoyable time! Always a real treat to spend time with them at their home and acreage. Thank you to Stephen and Dorothy for driving the four of us there and back. Greatly appreciated, as always.