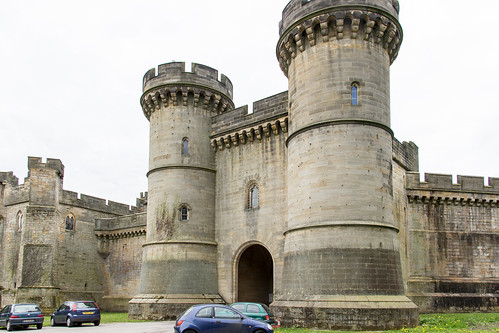 "Brancepeth Castle is a castle in the village of Brancepeth in County Durham, England, some 5 miles south-west of the city of Durham. It is a Grade I listed building.

A succession of buildings has been on the site. The first was a Norman castle built by the Bulmers, which was rebuilt by the Nevilles in the late 14th century. For many years the castle was owned by the Neville family until in 1569 it was confiscated by the Crown following the family’s involvement in the Rising of the North.

There have been a number of other owners since that time. In the early 17th century, the estate was granted by the Crown to Robert Carr, 1st Earl of Somerset, from whom it subsequently confiscated the castle back due to his involvement in a poisoning scandal. In 1636, three men who had bought the castle from the King’s Commissioners in 1633 sold it to Ralph Cole of Newcastle. His grandson, Sir Ralph Cole, 2nd Baronet, sold the property on 9 April 1701 to Sir Henry Belaysyse, whose daughter was involved with Bobby Shafto and who was said to have inspired the famous song. In 1796 the castle was acquired by William Russell (1734-1818) of Newbottle near Sunderland, a wealthy banker and mine owner and father of Matthew Russell (1765–1822), MP for Saltash in 1818, who in the 1820s spent lavishly on the Castle’s reconstruction. The present building is largely his work, to the designs of the architect John Patterson and improved in the mid-19th century by architect Anthony Salvin for William Russell, (High Sheriff of Durham in 1841). During the First World War the castle was used as a hospital by convalescents from Newcastle General Hospital. In 1939 it became the regimental headquarters for the Durham Light Infantry, who erected a military camp of over 100 huts to the south of the village during the Second World War. The Durham Light Infantry left the Castle in 1962.

The castle is now privately owned by the Dobson family. Margaret Dobson, wife of publisher Dennis Dobson, bought the castle in 1978 to store the company’s stock of books when the lease on its Notting Hill premises expired. Her husband died that year before the move north, but the family moved nevertheless and Margaret Dobson did much to restore the fabric and interior of the building, including the lead roof, which had been stripped by an earlier tenant. She refurbished many of the main function rooms for use as a venue for auctions and twice-yearly craft fairs, Shakespearean plays were staged in the main courtyard, and rooms were rented to post-graduate students at Durham University and other tenants. Margaret Dobson died aged 86 on 19 October 2014, leaving four sons, three daughters and 11 grandchildren.

A stash of original French political posters from 1968 was subsequently found in the cellar of the castle by the Dobsons’ son Oliver and featured in the BBC programme Inside Out North East & Cumbria in February 2019.

Brancepeth is a village and civil parish in County Durham, in England. It is situated about 8 km (5.0 mi) from Durham on the A690 road between Durham and Weardale. The population of the civil parish taken at the 2011 census was 414.

Brancepeth Castle was until 1570 the fortress of the Neville Earls of Westmorland. The castle was extensively modified and rebuilt in the 19th century by Viscount Boyne (later Baron Brancepeth). It was later a military hospital.

St Brandon’s Church was famed for its exceptional 17th-century woodwork, until it was destroyed in a major fire in 1998; the church has since been restored and reroofed.

In 1924, Harry Colt laid out a golf course on the deer park which formed part of the estate surrounding the castle. A club house was created from the old coach house and stables and remains in use by Brancepeth Castle Golf Club. The 6400-yard, par 70 course is regarded as one of the finest in the north-east of England.

Remains of Brancepeth railway station in 1965
According to one story, the village’s name is said to derive from "Brawn’s Path". There is a legend that Brancepeth was once terrorized by an enormous brawn, which was eventually killed by a knight named Sir Roger de Ferie in 1208. A commemorative stone marks the traditional location of the brawn’s death.

A more likely explanation is that it derives from "Brandon’s Path", after St Brandon, the patron saint of the parish church." – info from Wikipedia.

Summer 2019 I did a solo cycling tour across Europe through 12 countries over the course of 3 months. I began my adventure in Edinburgh, Scotland and finished in Florence, Italy cycling 8,816 km. During my trip I took 47,000 photos.

Become a patron to my photography on Patreon.