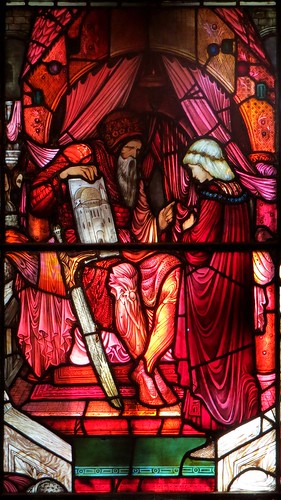 This is the first of a few churches and cathedrals we visited in the USA & Canada last year. I was very surprised at what I found.
The church was built between, 1872–1875 in the Northern Italian Gothic style heavily influenced by John Ruskin. The roots of the church go back to a congregation of 1669. The architects were Charles A. Cummings and William T Sears. Their faces are carved on the portico on Boylston St.
The campanile was built using pink, grey and brown stonework; (although this was later replaced in the late 20’s, early 30’s, due to subsidence, Allen and Collens designed it and was dedicated to Rev. Dr. Gordon. The walls of the church were of Roxbury puddingstone. The cupola is of a green and red-colour copper. The roof is striped with red and black tiles and there any many outside decorations. A very impressive building from the outside, however, if you thought that was something, the interior was spectacular.
In 1905, Louis Tiffany was commissioned to bring into the modern world, the sanctuary. He had the gas chandeliers removed and covered stain glass windows and put in their place his own deep purple glass and painted over already decorated walls with gold and purple seaweed designs. However someone could not have liked these designs because in the 1950’s they were painted over in a pale grey. Today we see the result of an extensive renovation carried out in 1984. This work was done by the prestigious Shepley, Bulfinch, Richardson and Abbott. The sanctuary was returned to the Ruskin theme using new stencils, chandeliers, rebuilt windows, woodwork and custom furnitures.
The windows were as always my favourites. The sanctuary were four windows depicting the four prophets, the smaller windows are the four evangelists. In the north transept show Christ’s five miracles, opposite (south transept) show the five parables. The large window above the chancel depicts announcement of the Birth of Christ, with shepherds, angels and many other symbols. These windows all come out of the workshop of Clayton and Bell.
Within the church is the Gordon Chapel, built in 1933 and dedicated to Rev. Dr. George Gordon, senior minister between 1884-1929. The windows here were designed and made by Wilbur H Burnham, a top Boston glass designer.
All in all a brilliant day, the one down side, it was such a bright day plus all the interior lighting I don’t think I did the best job with the camera, too many bleached out images. However it was still a great day. This is the last of three postings.