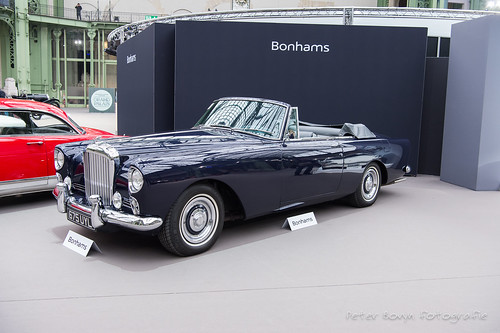 Introduced in the autumn of 1959, the Rolls-Royce Silver Cloud II and Bentley S2 appeared externally unchanged from their Silver Cloud and S-Type predecessors, though their performance was considerably enhanced by the new 6.230 cc aluminium-alloy V8 engine. ‘The Bentley S2, with its sister Rolls-Royce models, gives high-speed travel in silence and luxury, while the driver and passengers enjoy the sense of well being that only British craftsmanship can give. The V8 engine, with its flashing acceleration, certainly contributes to the result and is a definite step forward in Rolls-Royce technique,’ enthused Autosport. There were few significant changes to the running gear, though power-assisted steering was now standard and the manual gearbox had been dropped, Rolls-Royce’s own four-speed automatic transmission being the sole offering.

Built in ‘S2’ form from the autumn of 1959, Continental version of the Bentley remained, as ever, exclusively a coachbuilt car. The firms of H J Mulliner, Park Ward, James Young, and Hooper (with a solitary example) all offered bodies on the Continental S2 chassis, which differed from the standard version by virtue of its four-leading-shoe front brakes, shorter radiator and, up to chassis number ‘BC99BY’, higher gearing. Of these four, James Young, and Hooper would soon cease coachbuilding, leaving only Mulliner and Park Ward to carry on a noble tradition.

Chassis number ‘BC119LCZ’ is an example of Park Ward’s influential ‘straight through wing’ body style; it is one of 124 bodied in this fashion by Park Ward, and one of only 61 original left-hand drive cars. This Continental was delivered new to Rolls-Royce Inc in New York, USA where it was sold via J S Inskip Inc to its first owner: Gordon P Kelley of Chicago, Illinois. Copy chassis cards on file record that the car was originally finished in Dawn Blue with light blue hood and matching interior, and left the factory equipped with electric windows and aerial, power operated convertible hood, and Sundym glass. Only one other owner is listed on the chassis cards: an Adrian West of Morrisville, Vermont (from April 1971).

In more recent years the car returned to Europe where it formed part of a small private collection in Holland. Renowned marque specialists, Frank Dale & Stepsons have recently brought this handsome motor car up to showroom condition, with mechanical and electrical preparation as and where necessary, coachwork restoration, chrome restoration, a new hood and headlining, woodwork restoration, and new carpets (bills available). Now presenting and driving beautifully, this superb Bentley Continental comes with a complete small tool kit and is ready for pleasurable summer motoring to the Côte d’Azur and other such delightful destinations.