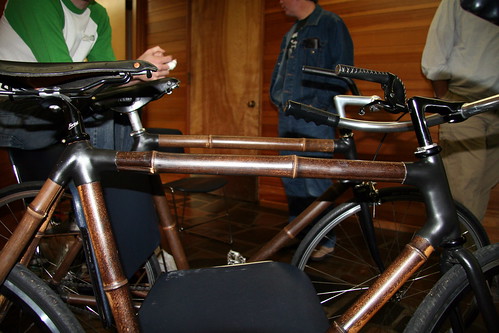 Its designers say the strength-to-weight ratio rivals some types of steel. Riders say the flexibility offers a remarkably supple ride.

The best part: you can grow the material for these one-of-a-kind bicycles in your backyard. They’re made from bamboo.

Designers Liakos Ariston and Jacob Prinz started Daedalus Custom Bamboo Bikes two years ago after drawing up designs on a napkin; so far they’ve made a limited run of high-end bikes that sell for around $1,250 each.

The raw materials are sustainable, so potentially make less of an impact on the environment, the designers say. But that’s not the only appeal.

"We’ve gained a lot more respect for the material we work with because we’ve had a few accidents on them and generally riders and bikes have come out unscathed," said Ariston, 25.

They’re not the only ones trying it. Craig Calfee, a California-based frame builder known for sleek and nearly weightless carbon fiber frames, began building bikes from bamboo in 2005. Now Daedalus is among a handful of designers, visionaries and artists using the material to produce pedal-driven machines from Slovakia to Brazil.

To make the bikes, Ariston and Prinz carefully hand select eight- to 10-feet lengths of phyllostachys nigra — an ebony colored bamboo native to China — and let them "relax" for as long as a year and half in their workshop.

After that, the bamboo is smoked to rid the material of bacteria and fungus. A heat application purges it of any residual water, making it less prone to cracking. Tung oil, beeswax and mineral spirits are used to seal the brown speckled culms.

The duo say the bamboo — a member of the grass family — has tended to respond to the energy they put into it; if they are too anxious to get a bike built the bamboo likes to split.

"One thing we are focusing on is taking everything we do and slowing it down, so you and bamboo can coexist together," said Prinz, 25.

After the bamboo has been cured and cut to appropriate lengths to construct the frame, the duo attach each piece to carbon fiber joints, or lugs. Traditional steel and carbon fiber are used for other parts of the bicycle.

The materials are relatively cheap; hard costs are roughly $250 per bike and the bamboo for each frame costs just $10. But each frame is a labor-intensive process requiring about 40 hours of manpower to complete.

Friends since high school, Prinz and Ariston still maintain their day jobs — Ariston works for his family’s wine import business and Prinz waits tables — but they are also drawing on more formal skills.

Ariston, who received a degree in structural engineering from Johns Hopkins University, has produced an eclectic body of work that ranges from gravity-driven water pump installations in rural South Africa to vegetated roof tops in Portland.

Prinz spent time working for his family’s construction company, but it was on a trip to Thailand where he got inspiration from seeing the bamboo woodworkers of Southeast Asia.

"I saw a lot of examples of what people were doing and the structures they could build, it was such a raw form of construction but at the same time they were able to build things up to our standards," he said.

Prinz said he is also beginning to experiment with bamboo for other products like lamps and bed frames. He said he likes to "take third world tools and resources — materials that have been used for hundreds and hundreds of years — and really put a first world twist on it."

But building bikes allows them to push the boundaries in ways other things don’t.

"When you are going cruising down a hill at 40 mph and you look down and you realize you are on two pieces of grass, it’s pretty cool," said Ariston.