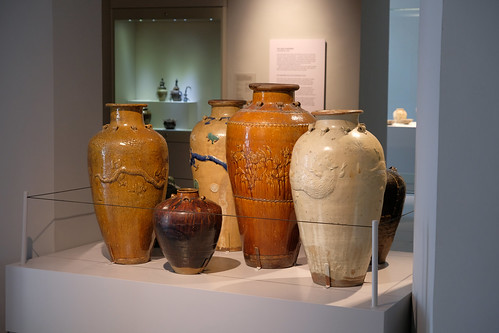 The Asian Civilisations Museum (ACM) is an institution which forms a part of the four museums in Singapore, the other three being the Peranakan Museum at Old Tao Nan School, the National Museum of Singapore and the Singapore Art Museum.
It is one of the pioneering museums in the region to specialise in pan-Asian cultures and civilisations. The museum specialises in the material history of China, Southeast Asia, South Asia and West Asia, from which the diverse ethnic groups of Singapore trace their ancestry.
The Chinese collection is represented by fine Dehua porcelain figures, Taoist and Buddhistic statuary, export porcelain, calligraphy and other examples of decorative art.
The South Asian Galleries feature statuary from a broad spectrum of periods including some fine Chola bronzes. Of particularly note is the Chola bronze sculpture of Uma, the consort of Shiva and that of Somaskanda. The early Buddhist art of India is also represented by works hailing from the Mathura and Gandhara schools, including a rare sandstone Mathura Buddha dating to the Kanishka era, and the head of a Gandharan Bodhisattva. Other areas of note include South Indian woodwork, Nepali-Tibetan bronzes, textiles, late medieval miniatures and colonial prints.
The Southeast Asian collections are broad in scope and are rich in ethnological material. Representing the aristocratic art of ancient Southeast Asia are Khmer sculptures, Javanese temple sculpture (some on loan from Leiden), later Buddhist art from Burma/Thailand and the Sinicised temple art of Vietnam. Peranakan gold, textiles, tribal ornament and theatrical masks are other strengths of the collection.
The Khoo Teck Puat Gallery is the permanent home for the cargo recovered from the Tang Shipwreck, a sunken 9th century trading ship bound for Iran and Iraq, discovered in 1998 off Belitung Island in the Java Sea. The recovered cargo comprises more than 60,000 well-preserved ceramics produced in China during the Tang dynasty (618–907), as well as objects of gold and silver.
Certain gallery rooms are also used for temporary exhibitions. A recent exhibition included the display of the spectacular Bronze Age masks from Sanxingdui, Sichuan Province, China.