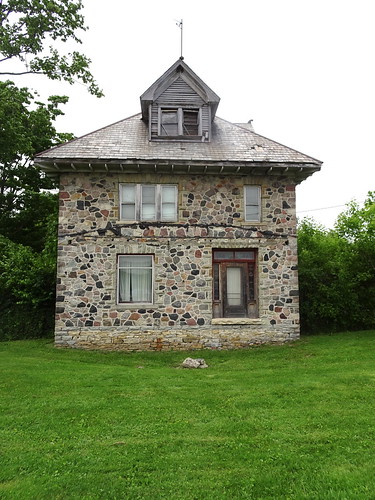 On my way out of Fort Wayne this week I noticed this beautiful old stone house in an odd location. The grass was trimmed but the house itself appeared to be totally neglected. There was a cyclone fence to the right that enclosed the area behind it where there were piles of gravel. From the looks of it I had concluded it might be a gravel pit or road maintenance location. Then a pickup truck pulled in and the gate opened. I went over and asked the guy driving what the story was. He told me that this was the boundary of the Fort Wayne Zoo and that they owned the house but did not have plans for it. He said that the inside was awful and full of raccoons. He also noted that it could not be torn down because it was on the National Register. (I could not find evidence of that)

Some of the slate on the roof was missing which is a really bad sign and the woodwork on the outside was very weathered, though mostly intact. You can see the ghost marks where the porch was attached. The design is pretty much a Foursquare though the materials and details are almost more Victorian. I wonder what will become of it. It seems like it would even be possible to gut the interior just to save the remarkable stonework on the outside.