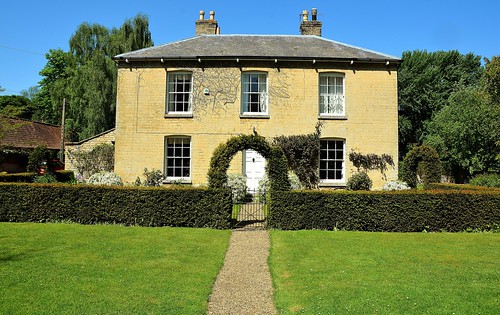 The Grade II Listed The Little House which was built in the early 19th Century as a Dower House for Hackthorn Hall. In Hackthorn, West Lindsey, Lincolnshire.

The population of the civil parish (including Cold Hanworth) at the 2011 census was 207. It is situated approximately 6 miles (10 km) north from the city and county town of Lincoln, and 1 mile (1.6 km) east from the A15.

The village dates back to Roman times. Its most prominent building is its hall, a large square brick house, built in the late 18th century in a landscaped park of around 100 acres (0.40 km2).

Situated among the trees of the park overlooking the lake is the parish church, dedicated to St Michael and All Angels. A village church is mentioned in the Domesday Book, although the present church is a Victorian gothic building. It contains carved woodwork in the reredos screen and gallery, and an 1869 Nicholson Organ, fully restored in 2006.

There is also a primary school, post office, shop and village hall.