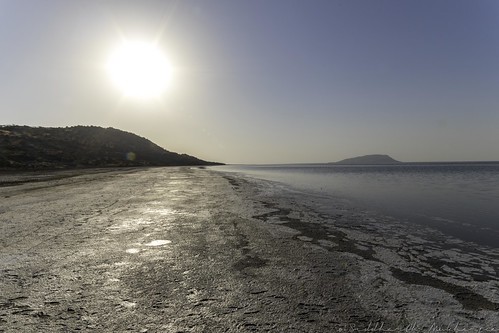 The vast expanse of the Great White Desert of Kutch

In the area controlled and patrolled by the Border Security Force (BSF) after the "India Bridge" several hundred square kilometers of Rann is pure white like snow with heavy deposit of salt crystals. The marshy Rann here becomes pure white and flat till the eye can see, till the horizon after the rain water has dried up, in the winters every year.

This photo was taken enroute to the excavated city of Dholavira from the Harappan civilization and at the Fossil Park at the edge of the Great White Desert.

This sanctuary has some other ancient attractions as well. Embedded in the Jurassic and Cretaceous rocks on Khadir, Kuvar and Pachchham bet islands in the Greater Rann, are plenty of fossils of vertebrates, invertebrates and plants. Fossils of dinosaurs, crocodiles (of the ‘Dinosaurian period’) and whales (dating from the Tertiary period) have been recorded to have been recovered from here. Fossilized trees and forests are found here in the rocks belonging to the Jurassic and Cretaceous periods. The fossils of invertebrates here include those of sea urchins, ammonites and such others.

The Great Rann of Kutch is a salt marsh located in the Thar Desert in the Kutch District of Gujarat, India. It is about 7,505.22 square kilometres (2,897.78 sq mi) in size and is reputed to be one of the largest salt deserts in the world. This area has been inhabited by the Kutchi people.

The name "Rann" comes from the Hindi word ran (रण) meaning "desert". The Hindi word is derived from Sanskrit/Vedic word iriṇa (इरिण) attested in the Rigveda and Mahabharata.

The Great Rann of Kutch, along with the Little Rann of Kutch and the Banni grasslands on its southern edge, is situated in the district of Kutch and comprises some 30,000 square kilometres (10,000 sq mi) between the Gulf of Kutch and the mouth of the Indus River in southern Pakistan. The marsh can be accessed from the village of Kharaghoda in Surendranagar District.

In India’s summer monsoon, the flat desert of salty clay and mudflats, which average 15 meters above sea level, fills with standing water. In very wet years, the wetland extends from the Gulf of Kutch on the west through to the Gulf of Cambay on the east.

The area was a vast shallow of the Arabian Sea until continuing geological uplift closed off the connection with the sea, creating a vast lake that was still navigable during the time of Alexander the Great. The Ghaggar River, which presently empties into the desert of northern Rajasthan, formerly emptied into the Rann of Kutch, but the lower reaches of the river dried up as its upstream tributaries were captured by the Indus and Ganges thousands of years ago. Traces of the delta and its distributary channels on the northern boundary of the Rann of Kutch were documented by the Geological Survey of India in 2000.

The Luni River, which originates in Rajasthan, drains into the desert in the northeast corner of the Rann. Other rivers feeding into the marsh include the Rupen from the east and the West Banas River from the northeast.

There are sandy islets of thorny scrub, forming a wildlife sanctuary and a breeding ground for some of the largest flocks of greater and lesser flamingos. Wildlife, including the Indian wild ass, shelter on islands of higher ground, called bets, during the flooding.

Although most of the marsh is in protected areas, the habitats are vulnerable to cattle grazing, firewood collection and salt extraction operations, all of which may involve transportation that disturbs wildlife. There are several wildlife sanctuaries and protected reserves on the Indian side in the Rann of Kutch region. From the city of Bhuj, various ecologically rich and wildlife conservation areas of the Kutch/Kachchh district can be visited such as Indian Wild Ass Sanctuary, Kutch Desert Wildlife Sanctuary, Narayan Sarovar Sanctuary, Kutch Bustard Sanctuary, Banni Grasslands Reserve and Chari-Dhand Wetland Conservation Reserve.

In India the northern boundary of the Greater Rann of Kutch forms the International Border between India and Pakistan, it is heavily patrolled by India’s Border Security Force (BSF) and Indian Army conducts exercises here to acclimatize its troops to this harsh terrain.

This inhospitable salty lowland, rich in natural gas, was one scene of perennial border disputes between India and Pakistan that, in April 1965, contributed to the Indo-Pakistani War of 1965. Later the same year, Prime Minister of the United Kingdom Harold Wilson persuaded the combatants to end hostilities and establish a tribunal to resolve the dispute. A verdict was reached in 1968 which saw Pakistan getting 10% of its claim of 9,100 square kilometres (3,500 sq mi). 90% was awarded to India, although India claimed 100% of the region. Tensions spurted again in 1999 during the Atlantique incident.

The Indus river had been flowing in to Rann of Kutch area and Rann of Kutch used to be its catchment area forming part of its delta. Indus river branch called Koree river, shifted its course after an earthquake in 1819 isolating Rann of Kutch from its delta. Pakistan has constructed Left Bank Outfall Drain (LBOD) project to bypass the saline and polluted water which is not fit for agriculture use to reach sea via Rann of Kutch area without passing through the Indus delta. The 500 km long LBOD, begins from northern Ghotki district in Sindh province of Pakistan and joins Rann of Kutch in Badin district of Sindh. Rann of Kutch is joint water body of India and Pakistan. Water released by the LBOD is enhancing the flooding in India and contaminating the quality of water bodies which are source of water to salt farms spread over vast area. The LBOD water is planned to join the sea via disputed Sir Creek but LBOD water is entering Indian territory due to many breaches in its left bank caused by floods.