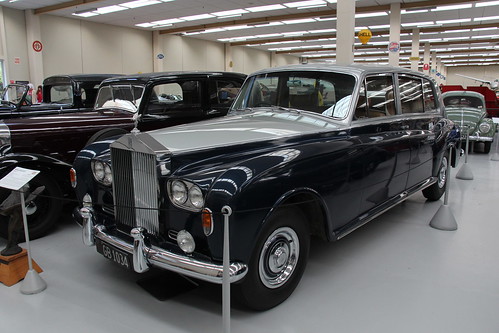 Rolls Royce was established in 1904 by the partnership of Charles Rolls and Henry Royce. They quickly developed a reputation for superior engineering and built one of the best cars and one of the best aero engines in the world. They acquired Bentley in 1931.
The Rolls Royce Phantom Series was introduced in 1925, they were the ultra exclusive, top of the line Rolls Royce.
The 1959-68 Rolls Royce Phantom V was a more modern car. Early models had single headlights, from 1963, quad headlights.
Like previous models, Rolls-Royce supplied the cars’ chassis and drivetrain with bodies made to standard designs by coachbuilders H. J. Mulliner, Park Ward, and James Young.
The coach builder of this car was Park Ward, it features a cocktail cabinet, electrically operated windows and air conditioning. The woodwork is French figured Walnut, comfort is assured with English hide upholstery.
This is one of two cars purchased by the New Zealand government for official use of the Governor General and visiting dignitaries on formal occasions such as the Royal Tour in 1963.
Engine; 6230cc V8, 516 produced
Photographed at the Southward Car Museum, Paraparaumu, NZ